Friday
Today we went to shore for long hot showers in their nice facility.  Then we picked up a rental car with a weekend special until Monday, which was cheaper than if we would get it on Saturday and return it on Monday at the usual daily fee.

Dave had been noticing that people don’t wave or say hello much the further north we have traveled.  Today he found out why.  He said hello to a guy on the dock and he went into a long story about how he left his boat open and the fog made everything damp inside.  Hmmm.  So they avoid saying hi to avoid long boring conversations, I guess.

We drove into Portland today.  It was only about 20 minutes away.  We went to the manufacturing site of our Portland Pudgy dingy.  It was great to meet the people Dave has been talking to on the phone.  It’s a small operation and the owner seems to be getting pretty old.  We just wonder if it will continue without him.   Dave had a few things to talk to them about.  I left to sit in the car, but happen to find a brewery at the other end of the building.  It was called Great Brewery.  Besides beer, they made Kombucha and Jun (fermented teas), cider and mead.  I stuck with the beer. 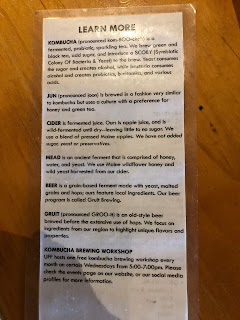 After Dave found me at the brewery, we went for lunch in the area.  We found an interesting neighborhood nearby, parked and found a restaurant called Terlinqua that had both Mexican and BBQ.  Dave had the BBQ and I had the tacos.  New beer: Sea Quench Ale session sour.  It had lime in it and was made by Dogfish Head.  Interesting.  After lunch, we went back to Portland Pudgy to buy new oars.  Ours were used that came with the used boat.  The owner said they make better ones now because there had been a problem with the old ones breaking.  We decided to just get them now rather than having to have them shipped somewhere later. 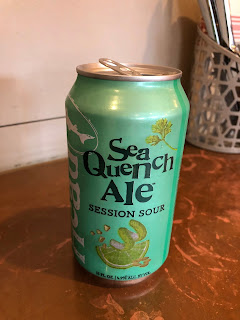 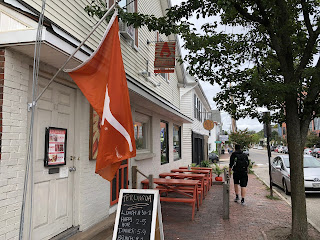 We drove along the seaport before leaving town.  It was touristy and there were lots of piers for shipping or cruise boats.  We were glad we didn’t stay here.  As we entered the interstate heading back to Freeport, we saw a sign that said “No Animals, ridden or driven”.  Haven’t seen that one before.

Freeport is the home of L.L. Bean, the outdoor store.  We decided to go to their outlet store, but we didn’t find anything we needed.  We wanted bedroom slippers, but the prices were still pretty high, and not really what we wanted.  Not impressed.

Saturday
The marina had asked us to move to a different mooring ball before Sunday.  They had a larger boat coming in on Sunday and needed our space.  The new ball was closer to the dock, so we didn’t mind.  We were just worried about moving through the lobster pots that were within the marina.  But we did fine.

Dave spent time adding the new parts to the Portland Pudgy.  He fixed a hatch and replaced the oars/oar locks.  He also worked on the port light above our salon.  There is one long window on the deck that has 3 separate shades on the ceiling inside.  That whole piece was replaced when we first bought the boat.  It was a sh#$@y job, and we have been chasing leaks ever since.  Dave worked on that today, since Pete will be sleeping under the leaking area.

I defrosted the freezer, cleaned the heads, floors and galley.  I killed a bug that shall not be named.  I have graduated from a scream to a war cry when I see one.

We also did our rental car routine: refilled propane tank, groceries, liquor store, church and pizza.  I spent the rest of the evening putting groceries away.  It takes much more work than at a house.  I get rid of most boxes and put things in bags.  I have to rewrap the meats and put in vacuum bags.  I had an assembly line going with Dave.  Then I have to tuck things away which usually involves moving things to get to the storage area.  Can’t just open a door and set things on a shelf.  AND I document where I put things and how many of each in an app on my phone. 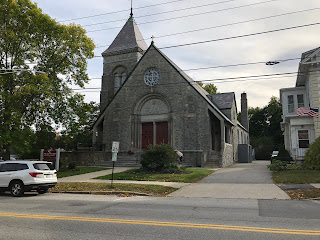 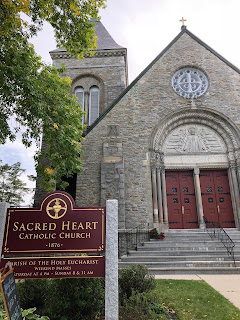 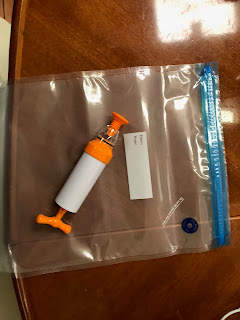 Last thing we did was get into the compartment that had spare bedding for Pete.  Can’t wait to see him tomorrow.


Posted by svluckofafool at 2:18 PM