The coffee maker in the house didn’t have a carafe, probably broken and the owner didn’t even know.  Rather than contacting the owner and waiting, or going out for coffee, I drove to a Walmart 2 miles away and bought a coffee maker for $10.

I made a frittata for breakfast to have with fruit and muffins.  The girls really were tickled that I was volunteering to cook.  We had a nice walk around the neighborhood until all of us had to pee.  Women over 60 drinking coffee have their limits.

Cheryl also made arrangements for us to go to a show, Le Reve-The Dream at the Wynn.  Being a scuba diver, she was drawn to a new show that had a water stage, Le Reve.  We had complimentary parking with valet at the Wynn, so we went directly there about 4:00.  The only request from any of us was to go to the Venetian to see the gondola canal.  Luckily, it was next to the Wynn.  We spent about an hour walking around the resort.  The gondola ride was $29.  We all agreed that we would rather put that money towards a nice dinner. 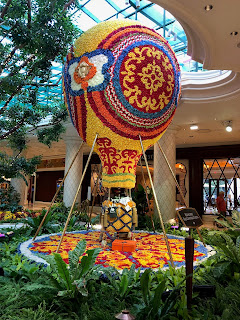 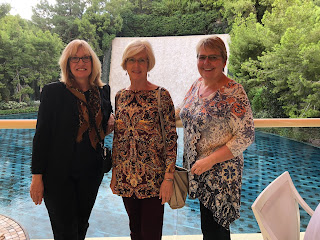 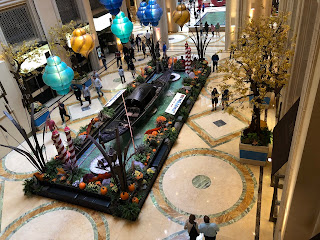 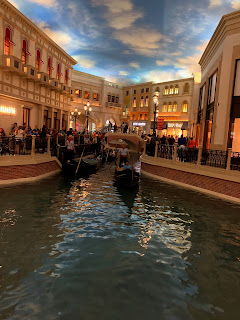 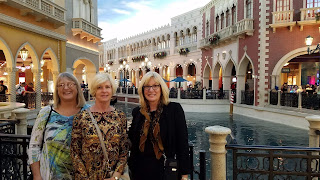 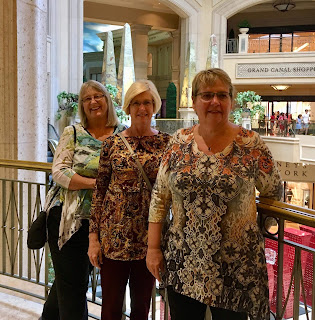 The show was at 7:00, so by 5:00 we started making dinner plans. We were all flexible, but Debbie didn’t want to eat pasta.  So that eliminated almost all the Italian restaurants in the Venetian, lol.  We decided to head towards a Vietnamese restaurant and stop along the way if something excited us.  Just as we were leaving the Venetian, we saw an ad for Chico, an Latin Restaurant in this casino/resort.  We decided to give it a try.  What a great choice!  We would highly recommend it.  We started with their special ceviche of the day.  It had shrimp, fish and octopi with the usual vegetables.  And it was served with about 6 kernels of pop corn on top.  Martha had a salad with prawns,  Cheryl had lamb, and Debbie and I had swordfish that was prepared wrapped in banana leaves.  Debbie had a side of grits that were cheesy and delicious.  I had a side of sautéed mushrooms with onion and peppers.  Also delicious.  And the sides came in bowls, so they were easy to share, as women do. 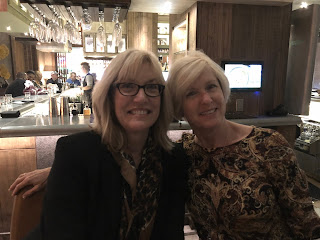 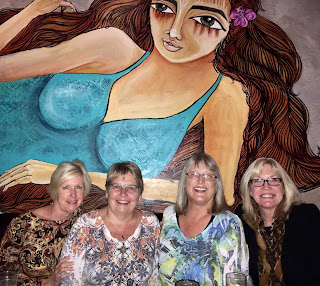 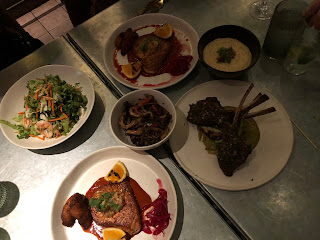 We made it to the show just in time.  What a show!!  Here is the written description.  “Le Reve is a stage production in residence at the Wynn Las Vegas casino resort.  It is the only Las Vegas show set in an aquatic theater-in-the-round stage.  The show features diving and feats of strength with special effects, including fire effects.”  It was not a Cirque du Soleil show, but similar.  Le Reve means the dream in French.  It tells a story of the struggle between good and evil.  The star, a woman, was drawn to the good guy vs the bad guy through out the show.  Of course, the performers, set, props, and special effects were all amazing. 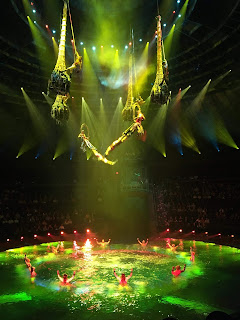 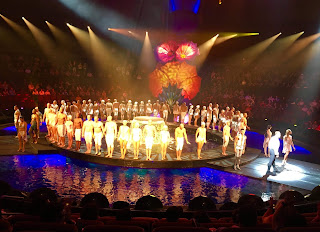 Next up: Fremont Street.  Only one of us had been there as an adult, and it had been many years.  This is the “old Las Vegas”.  The only thing I remembered was the Golden Nugget from when we stopped here on our way to California in about 1964.  There is a pedestrian mall on a section of the street covered overhead by a video screen that had light shows on the hour.  It was 1500 feet long, 90 feet wide and suspended 90 feet about the street.  AND you could zip line along the ceiling.  There were several stages with live bands.  There were circles on the street where street performers could stand and do their thing.  Most of them were men or women dressed scantily and wanting tips to pose for pictures with them.  We walked from one end to the other enjoying the music and “shows” and people watching.  We were kind of surprised by the number of families there with kids.  It was well lit, and we felt very safe wandering around.  I wasted the last $8 in my pocket on a machine when we stopped in a casino to use the bathroom.  I was the only one that gambled.  I guess my fortune cookie didn’t mean this soon for my great wealth. 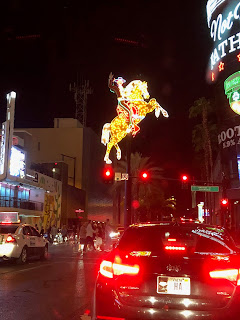 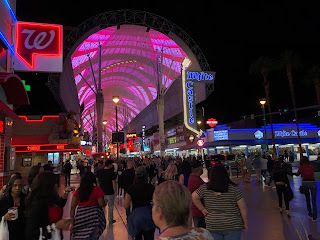 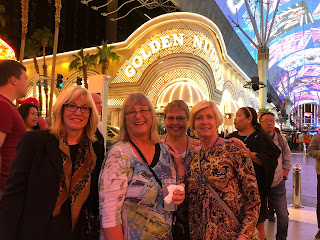 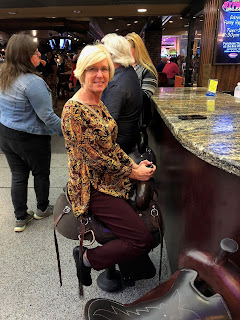 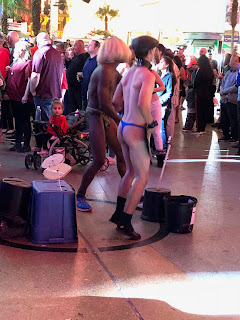 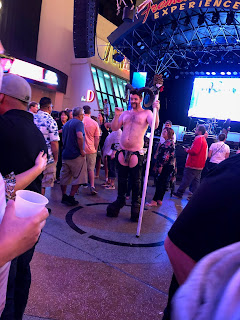