Friday
We are staying in Gloucester until Sunday.  We are waiting for parts to arrive.  And we are waiting for hurricane Michael to pass by.  Originally, we thought it was going to pass over us, but it moved off shore further south.  What’s strange is that the wind is from the north today because of the circular pattern of the hurricane.  Little different from the blizzards I grew up with. 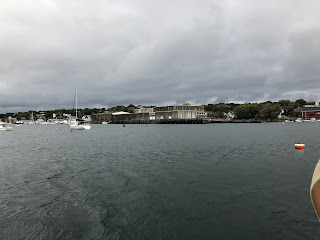 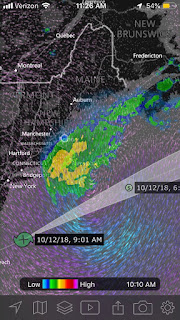 My airport shuttle driver recommended we eat at Virgilio’s Italian Bakery for their sandwiches.  We decided to stop there on our way to the grocery store today.  Wow!  What great sandwiches!  Dave had a meatball sandwich and I had an Italian sausage with peppers and onions.  The bread was amazing.  I guess they run their bakery 24 hours.  Many restaurants in Boston use their bread.  Great recommendation!  We like to ask the locals for their favorite places. 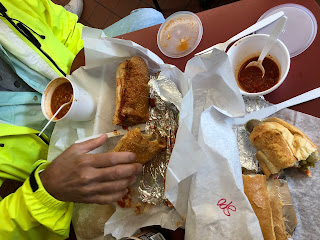 We walked about a half mile up hill to the grocery store.  We carried everything back to the boat on our backs and in bags.  We’re thinking next time a cab ride would be cheaper than physical therapy. 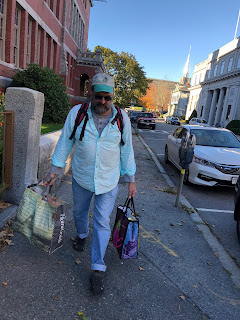 Saturday
We spent the day getting the boat ready to move south.  We have been in Gloucester for about 2 weeks.  I spent the day cleaning.  Then I took the dinghy to shore for church in the afternoon.

Dave stored our fuel jerry cans on deck after filling them this morning by dinghy.

Dave used an old trick he learned on our Catalina 25.  He ran chalk around the inside of the hull to detect water leaks.  The line will smudge where the water runs across it.  He had found a leak in our aft deck shower.  The mixing valve was one of the parts we received this week while we had a mailing address.  The water under the batteries looked like it could have been coming from other hoses, but once he ran the chalk line, he found the leak in the shower.  As he was replacing the mixing valve, he noticed that the hose clamps on the hot and  cold water hoses had corroded and both of these hoses were leaking, too.  Amazing how all things things are discovered and add to the overall problem.

Our neighbor Will had picked up the blue chalk for Dave.  Dave sent him this text “I mixed the chalk with some beans and farted a blue streak around the boat.  Can I write you a check to pay you for the chalk?”  Will replied “no, farts are free amongst friends”.  We found someone who gets Dave’s humor and throws it back at him!

The access to the aft shower is through the aft lazerette.  So today he had to place things back into the lazerettes.  We also spent the day tucking up things inside that won’t stay put once the boat heels.

We listened to Alabama college football tonight.  We were in bed for the end of the game, since they were winning.  We planned to take off early in the morning to make it through the Cape Cod Canal with the correct flow of the tide and be able to anchor before dark.
Posted by svluckofafool at 11:20 AM