July 28. Saturday
Since we had good weather to be on the ocean, we decided to outside of Long Island along it’s southern shore.  We weren’t sure we were ready for boat traffic in the New York Harbor, especially on a weekend.
The VHF radio sounded like we were right in the city.  People were talking to each other as if they were yelling from their cars.  Besides people being grouchy with each other in their NY accents, there was the USCG and NYPD and kids playing with the radio.  CRAZY!
It was still amazing to see the skyline as we left.  Sandy Hook is on the southwest side of the inlet and Long Island is on the northeast.  We had to cross the shipping traffic going in and coming out of New York City.  It actually went easier than we thought it would.  There were lots of pleasure boats on the water. 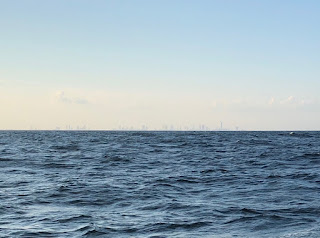 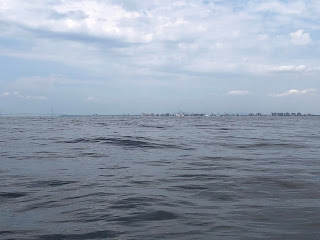 Once we were on the south side of Long Island, we saw about a dozen ships lined up at anchor.  They were waiting to go into the harbor.  Sometimes they are waiting to off load or pick up a load.
We passed by Jones Beach and the concert venue on the water.  Jimmy Buffett will be having a concert there on August 2.  I couldn’t convince Dave to hang out and hear the concert from our boat.  He convinced me that there would be lots of drunk boaters with lots more money that us that probably wouldn’t care if they hit our boat.  I guess we’ve finally grown up.
Dave watch 7:30 and me at 2:00 am.  There had only been a few other sailboats in the area.
I had wifi, so I checked where Jimmy Buffett has a home in Sag Harbor.  We were about 10 miles south of his home.  No, I am not a stalker.

July 29, Sunday
I had arranged with my friend, Nancy Sundstrum to Facetime with me to watch the sunrise.  Well wouldn’t you know it, it was foggy this morning.  And I was a little stressed about watching for ships in the fog, so I had told her I wouldn’t be able to.  About 15 minutes later, the fog cleared, so I called her back.  It was still pretty cool for her to see the sun on the water just after sunrise. 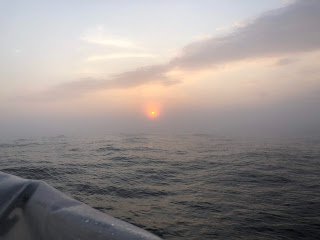 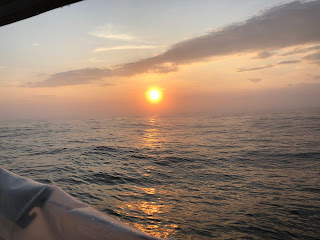 Once the fog lifted, I could see the end of Long Island on my left and Block Island on my right.  We had considered going to Block Island first.  But it was Sunday and there were a lot of boats in the harbor for the weekend.  It was only about 9:00am, so most of them wouldn’t be leaving until later today.   Onward to Narragansett Bay, Rhode Island.  Now we felt like we were in New England.  I couldn’t help but notice that everything looked so drab compared to the Bahamas being so colorful.  But the lighthouses and home were fun to see.  There was a lot of traffic when we entered the bay by Newport.   Dave had found reasonable mooring balls in Bristol.  We used Dockwa online to make a reservation for the first time.  It looks like a lot of marinas use this app.  It worked well.  We were on a mooring ball at the Herreshof museum by 2:15 pm. 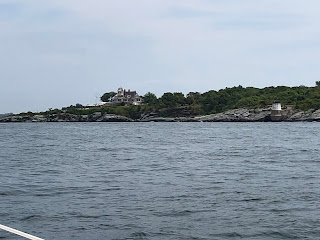 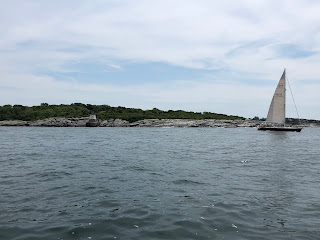 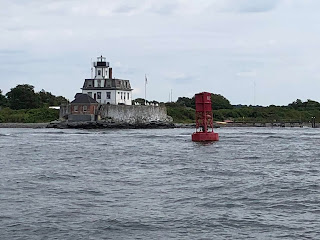 The Herreshoff Marine Museum presents the history of the Herreshoff Manufacturing Company.  They built several of the winning boats for the America’s Cup, which started in this area.
Now that we are physically here, we made travel plans for Dave’s mom to come visit us in Rhode Island.  She will fly out of Minneapolis and into Boston so she doesn’t have to change flights.  I guess it’s less than 2 hours to Boston from here. 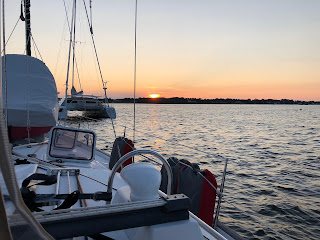 Posted by svluckofafool at 12:10 PM