Wednesday
We motored to Padanaram, MA, back across Buzzard Bay.  It is just west of New Bedford.  There is a marina here that Dave talked to for a possible haul out.  The guy Dave talked to sounded like a teenager.  And whenever Dave mentioned our shaft, he would repeat rudder.  So he didn’t have a good feeling about the place.  Maybe we’ll check it out by dinghy first.
We had water in the main bilge and a little in the aft area.  So may have a combination of things still going on.  The rest of the day was spent waiting for the surveyor to call, and always some cleaning or small project to do.

Thursday
As we were enjoying our morning coffee, we heard a boat circling our boat.  When we looked outside, they were taking pictures of our boat.  So we went outside to see what they were up to.  We met Ted and Judy, on their power boat.  They just bought a sailboat and liked the way our solar panels were mounted.  They lived on shore near where we were anchored.  We asked them what they thought about the local marina for having boat work done.  They wouldn’t recommend it.  They gave us the name of a few places in New Bedford, MA and Narraganset Bay, RI.  Since we wanted to keep moving northeast, we chose to move to New Bedford.  They also gave us their phone number and told us to call if we have any more questions about the area.

We called Bayline Boatyard in New Bedford to reserve one of their mooring balls.  We headed there about noon.  It was only about an hour away.

New Bedford has a very impressive hurricane wall.  It is 26 feet high and controlled by a gate.  They have the largest active fishing fleet in the US in this bay.  The wall was built after a couple hurricanes damaged the fishing fleets in the bay and parts of the town.

Once we were settled on the mooring ball, we went into the office for Bayline.  We had to tie up at a public dock and walk less than a block to their property.  We talked to them about hauling our boat out for a survey-a short haul where they put you right back in the water.  If by chance we needed to stay out of the water, we didn’t want to do it before the long Labor Day weekend.  So we planned to haul our boat out on Tuesday.  Our surveyor wants to see our boat in the water before it is hauled out.  They thought that would be possible at the public dock as long was we stayed out towards the end.  That way others could still use the dock.  That worked for our surveyor, too.  So we were all set for Tuesday.

We took a tour of the bay by dingy.  This is an industrial port.  It was difficult to see where we could tie up to go ashore.  As we were passing Pope Island, in the bay, we asked another boater about being able to get a beer somewhere.  They directed us to Fathoms Restaurant on Pope Island that had their own dinghy dock.  We enjoyed a scallop ceviche and a couple drinks at an outside bar and were back to the boat for dinner. 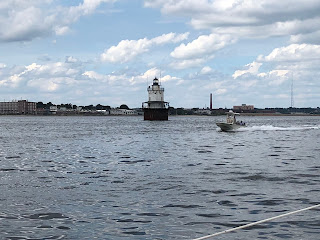 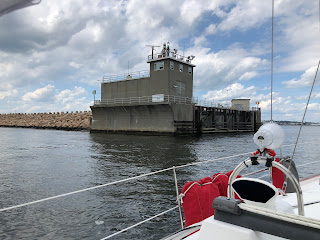 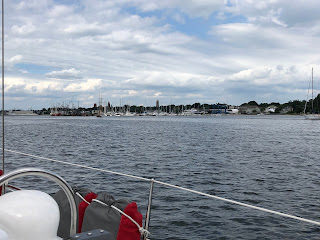 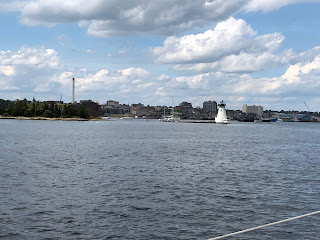 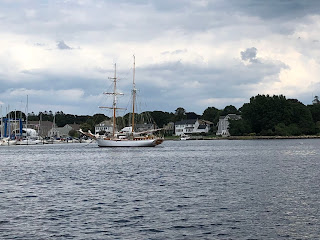 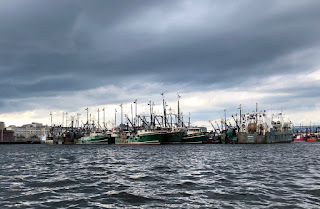 Posted by svluckofafool at 3:43 PM