Many of the marinas in the area were full and couldn’t take transient boats.  This marina was full, but they made room for us in the slips of boaters that were gone for a few days.  BUT, that meant moving our boat.  We were originally on Dock D and moved to Dock B today.  Besides the dock hands, local boaters usually come out to lend a hand grabbing lines.

In the afternoon, I used the rental car to do a grocery store and liquor store run.  Dave and Alice relaxed at the boat.  When I returned about 3:00, we decided to have an early dinner of tacos on the boat.

This evening, there was a party at the marina.  They have a really nice grilling area and patio with seating.  There are 3 guys that own a boat together that wanted to provide a party.  One of them has a brother that sings in local bars.  He played guitar and sang along with his son.  It was all music from the 60’s and 70’s.  We loved it.  We were told it was BYOB, but we found out when we arrived that they provided food, too.  We tried their clam chowder and a mix of grilled sausage peppers.  We also met several other boat owners.  Most of these people live in the area and dock their boat here for the summer. 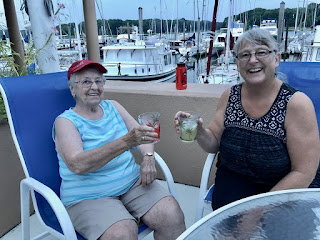