Saturday
Today we moved the boat to St Johns Yacht Harbor.  It is about 5 miles south and west of Charleston.  We had to time going through a lift bridge that opens once an hour on the half hour.  Plus after the bridge, there is a narrow channel that can have strong current.  We like going against the current with more control.

We left at 10:00 and just barely made the 10:30 opening of the bridge.  Going though the Elliot Cut went fine.  You could feel the boat slow down against the current.  We arrived at the marina about 11:10.  They have a strong current here also.  So they recommend entering your slip at slack tide when the water moves the slowest between high and low tide.  That wasn’t until 12:30.  So they let us tie up to a T dock, on the end, until 12:30.  We like to have our stern close to the dock because our power outlet is on the stern.  So Dave smoothly backed our boat into the slip.  The dock hand even complimented him on knowing how to handle his boat.

I had made banana bread this morning and shared some with the staff.  I think they’ll treat us pretty good this week.

The marina had a courtesy car, so I used it to go to church and hit a grocery store.

Our friends, Joe and Erin Clausen were driving here from Minneapolis.  They arrived about 2:30am (after we napped for 3-4 hours).  We visited until about 4:00am.  Always fun to see them.


Sunday June 24
After a lazy morning, Joe and Erin offered to take us around town to run errands.  When we ordered our windlass, they gave us free rode and chain as some kind of promotion.  Of course it arrived after we left Brunswick, but they offered to send it to any West Marine.  So we chose the one near this marina.  That was our first stop.  We also went to Walgreen's and Lowe’s.  We stopped for lunch at the Roadside Seafood restaurant.  It was a great local southern place with fried and grilled fish and shrimp.

We stopped at a Harris Teeter grocery store for a few more groceries and some local beer.  They had a special on raw oysters, $1.99/dozen, but recommended eating them the same day.  We took them back to our marina and put them on the grill just until they popped open.  That’s a lot less work than shucking them yourself. 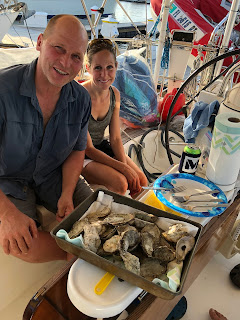 Joe is an awesome cook.  We bought tuna steaks, and he cooked them at the boat and made an orange and chipotle pepper sauce.  Outstanding! 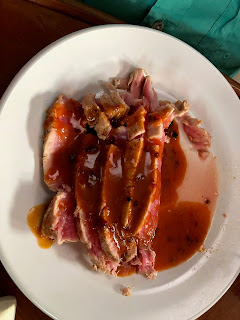 Monday June 25
Erin made us crepes for breakfast.  We made a warm peach sauce out of fresh South Carolina peaches.  I have enjoyed SC’s peaches more than GA’s.

We spent the day playing in the water near the marina.  We put Skadoosh, our Portland Pudgy in the water.  Dave and Joe sailed it to a sandbar near the marina on the Stono River.  Erin and I met them in the dingy.  They had trouble sailing it back against the current, so we graciously offered a tow. 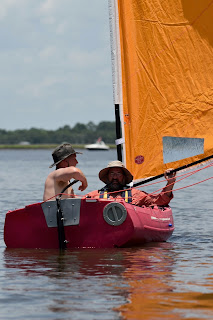 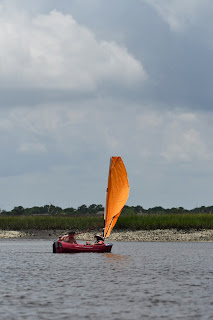 After sandwiches at the boat, Erin, Joe and I drove to Folley Beach to check it out.  We wanted to see if it was worth coming back to spend some time at the beach.  It was a nice clean beach with rock Jetty’s spaced along it called groins.  I guess they help keep the sand on the beach in rough weather.  While Erin was shopping for bathing suits, Joe and I found an Irish Pub.

Posted by svluckofafool at 1:12 PM