June 8, 2018 Friday
We finally left Brunswick Landing Marina after 11 months of having the boat docked here.  We returned the rental car in the morning and tucked up things as needed.  Then we had to wait for a rain shower to pass.  It was about 2:30 when we left our slip.  It was fun to have friends saying good-bye as we left which brought up mixed feelings.  We were excited to be on another adventure, but sad to leave the many friends we have made at this marina. 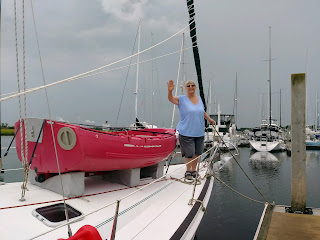 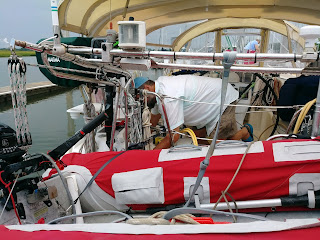 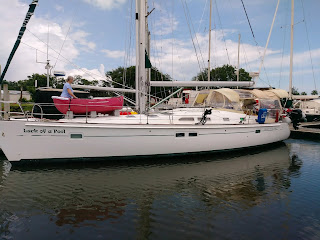 We only traveled about 13nm in 2.5 hours and anchored just off the ICW north of the bridge to St Simon’s Island.  We always see boats anchored here when we drive to St Simon’s and it looked so peaceful.  We tried out our new Mantus anchor and new windless.  The chain is bouncing, so it slips in the gypsy, which should grab the chain.  The windless seems to go faster than our old one.  There are a combination of things going on here that Dave will research and figure out how to correct.

It was great to be at anchor again.

Saturday, June 9
Dave needed to “fix” his new fuel jerry cans before he could fill them with fuel.  After that project was complete, we took the dingy to Morningside Marina for fuel.  We had fun taking the dinghy for a ride.

Once we were at the marina, we easily talked each other into eating at their restaurant.  Luckily, they had outdoor seating, because Dave forgot his shoes.  They had a smaller brunch menu on Saturday and Sunday, but fun.  You could choose 4 levels of spice for your Bloody Mary, so I had to try their hottest.  It was like I would have made it myself, so everyone else must be wimps.  They had “Dirty Oysters” on the menu.  We had to try a dozen.  They were raw with Pete’s Texas hot sauce, caviar, and sour cream, $17/dozen.  They were awesome.  We’ve never seen that offered anywhere else.  $1 an oyster is a good happy hour price around here.  So $17 for the extra goodies seemed fair to us.  Dave couldn’t pass up a hamburger and fries.  But I tried their shrimp and cheese grits with Andouille sausage, onions and peppers and a tomato gravy.  Pretty tasty.

We headed back to the boat full of fuel and food.  After securing the jerry cans, we moved the boat 8nm further to our original destination, Wally’s Leg, a small creek off of the ICW.  We anchored here 4 years ago and remember it as a peaceful spot.  Dave had a Georgia fishing license, so we threw out a couple crab hand lines.  We caught 2  blue crabs right away.  The tide changed and the current picked up, so we didn’t catch any more.  We 1/2 boiled, 1/2 steamed the 2 of them with Old Bay seasoning and dug into them for our dinner.  Yummy!


This link is to see a video of us leaving the marina.  I couldn't figure out how to copy it to the blog.


Sunday, June 10
We wanted to run our water maker, so we stayed here another day.  We first ran the water out of the tank, since it had been sitting in there for months.  Dave had made water while at the marina a few months ago.  It’s hard on the water maker to let it sit too long.  After draining that tank, we filled it with water from this area.  We always check the TDS, total dissolved solids, before filling the tank.  It should be under 500.  This registered at 5!!  That’s the purest water we have ever seen.  The water in the Bahamas may look crystal clear, but the salt and warm temperature make it much higher, usually in the 300 range.

Monday June 11
Since we’re “retired”, we had a lazy morning and didn’t leave the anchorage until about noon.  At 1:10 we grounded and came to a dead stop.  We were probably a little too far to port in hind site.  There was a warning for this area, but we were seriously putting on bug repellent at the time. The horse flies have been vicious.  Note to ourselves: do that when there isn’t a hazard in the area.  We were on a rising tide, so that was in our favor, but high tide wasn’t until about 3:30.  We occasionally tried to power through the area with turning the boat from right to left. We have a “bulb” keel, so sometimes we can squirm our way through.  Whenever a power boat came by, we tried to take advantage of their wake.  2 barges passed us on the starboard side and had plenty of depth for their 6 foot draft.  A sailboat came up behind us and started to pass us on the port side.  We called them on the VHF radio to tell them to pass on the starboard, but they didn’t answer.  We waved at them to pass on our starboard and they circled around.  Finally about 5 coast guard power boats passed us on our starboard and they got the hint.  About 2:30, we floated off the low spot, but were stuck right away again.  About 3:00, we finally moved with the rising tide.  It’s a patience game.

We were heading to one of the 3 shallow areas on the ICW in Georgia, Little Mud River.  So we stayed on the trail of the second barge that passed us.  We figured we were safe in his path.

When we made it to our anchorage, we had a great breeze in the cockpit.  That also keeps the bugs away.  We had to sit out there with a couple gin and tonics to debrief running aground.
Posted by svluckofafool at 4:51 PM