Since I am behind in typing up this blog, We can’t remember all the things we did for the boat.  So I am relying on my photos to fill in the blanks.

One of our favorite restaurants within walking distance of the marina is Maggie Mae’s.  It is open for breakfast and lunch.  Maggie is a real southern sweetheart and treats all her customers so sweet with her southern drawl and calling you “Baby”.  Before I left for SD, I had a chat with her about Dave frequenting her restaurant.  I told her he had to bring in a picture of something he had completed, or show her a list with things checked off before he could eat there.  The first time, he told her how he had been researching projects on the computer and didn’t have a picture for her.  She left and came back, then showed him her cell phone and said “here is a picture of your breakfast”.  At future visits, he showed her a list that he had made, or how he had clipped his fingernails.

We had a small water leak that Dave spent a lot of time tracing before he joined me in SD. He had found the source and worked on that after her returned in April  There was a fresh water leak from the aft water tank vent. Dave repaired that, and while he was there, he tightened all hose clamps to avoid any other leaks.

While in the marina last fall, Dave installed an SWR meter to tell you how much of your radio signal power is being broadcast verses how much you are losing signal around you.  He connected a “dummy load” to test the system without broadcasting.  All the tests were good.  Then he reconnected to the antenna and the tests were all good.  Then before the hurricane in September, Dave disconnected parts of the SSB radio for lightning protection.  After reconnecting things, the SSB radio automatic tuner was not working as it did before.  There is probably a bad connection, so Dave spent time researching this online and trying different things with the system, like cleaning connections.  Now it will be a process of elimination to see where the malfunction if located.

After removing the generator last December, Dave had to plug the through hull.  He also had to close off the diesel fuel lines, one going into the generator and one returning to the fuel tank.  He left everything in place so it will be easy to add another generator in the future.

Along with some of the other sewing projects I have mentioned, Dave also sewed a bag to hold all of the fenders that are stored when under way.  He sewed a bag for our Whale Pump hose.  This is an emergency pump should our bilge pump not be working.  It can also be used to bring water into the boat in case of a fire.  Dave also sewed 2 laundry bags for me out of water proof material.  That is handy if you are hauling laundry in the dinghy, or walking in the rain. 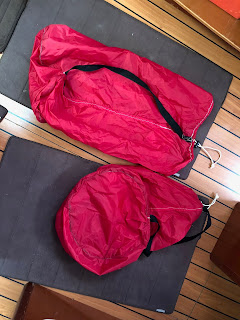 One of the arms that supports the freezer door had broken where it attached to the lid.  Dave had emptied the freezer and refrigerator before visiting me in SD in Feb.  So when he returned in April, he repaired the door and replaced the seals on refrigerator and freezer before restocking the refrigerator.  At that time, he also replaced the seal around the galley sink.  Then he caulked the cabinetry in the galley where it contacts the countertop.  Nice improvements.

Dave replaced all the running rigging, which are the lines that control our sails. Since our main sail is furled inside the mast, those lines are referred to as the out haul and the main furling line.  The one that winds up in the mast is the main furling line.  The mechanism that holds it was rusted and rotting.  Dave had to remove that and replace it.  Nothing is as simple as you vision it to be. 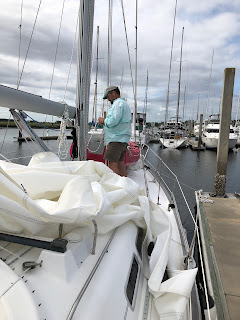 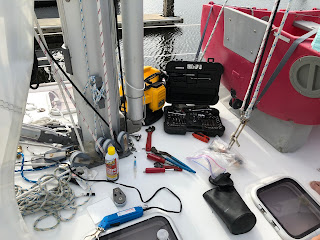 In February, Dave’s brother, Dean, came to visit him in Brunswick.  They spent time on St Simon’s Island, Jekyll Island and St Augustine.  They even spent an evening at Woodbine at the Woodbine Opry.  At the intermission, they ask if there are any first timers there.  After Dean said he was from Minneapolis, he was hit on for dancing during the second half of the evening.

Dave placed corner brackets on the solar panels.  The corners are sharp, so this will protect us from future scrapes.  We had put our solar panels and our jib sail in the storage unit back in September before hurricane Irma.  So those had to be brought back to the boat and replaced.  We also stored the cockpit cushions and some inside cushions to give us more room to work on the boat.  Those all had to be brought back shortly before leaving the marina. 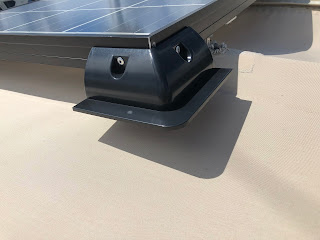 Posted by svluckofafool at 2:17 PM