I woke up about 6:30am when I felt the wind pick up.  We got up around 7:00 and started watching the weather change.  Around 8:00, we noticed the little boat behind us was dragging it’s anchor and getting closer to Ritamarie, Mike and De’s boat.  A few of the boats visited with each other on the radio.  De and Mike said the people on the little boat anchored last night and left shortly after that for shore in their dinghy.  So they weren’t even on the boat.  The wind is supposed to shift more to the west, so if it continues to drag, it should miss their boat.  But they were going to have their dingy ready to use as a fender between the boats, if needed.  Dave and Mike discussed getting on the boat to reset the anchor or let out more rode, the rope holding the anchor.  But that little boat was bouncing around so bad that someone could get hurt.  They could see the name of the boat, so Dave put out a call on the VHF radio on channel 16 asking if anyone had information about the owners of the boat.  No answer.  So we all wished them luck.

We knew the storm was supposed to hit us about 11:00 am.  That is much better than during the night.  And we knew we would get hit by rain before the worst of the winds.  As Dave put it “the rain is supposed to lead the battle”.  About 9:30, the winds were getting even stronger.   Dave went out to the bow to get our second anchor ready, just in case.  I decided we better have breakfast before “all hell breaks loose”.  After that, we sat in the cockpit to watch the storm roll in.  I asked Dave what kind of emergency we should be ready for.  He thought if our anchor started to drag, he would want to reset it, or set another anchor.  So I should be ready at the helm.  That sent me below to get our life jackets and the tether to tie onto the jack lines, which we still had up from our crossing.  He also said if the wind was really strong, it could rip out our solar panels.  But there wasn’t much we could do to stop that.

I turned on our instruments to be able to see how hard the wind was blowing.  It was staying in the mid 30’s, but we were expecting gusts to 50 or 60 knots.  The cold front was approaching from the north west.  But it was drawing wind into it from the south.  As we could see it approaching, our boat started to swing to the west, then we were hit by a wall of rain.  That’s when I went below.  Dave stayed outside throughout the storm.  The wind seemed to settle down to the 20 k range by early afternoon.  The next day, we were told that the highest anyone saw was 44k.  So it ended up not being as bad as we expected, which is always good.

We decided to run our generator to charge our batteries.  The solar panels weren’t keeping up in this cloudy weather.  That also lets us use our electrical outlets.  So we ended up being lazy and watching movies for the rest of the day.  It was too windy and rainy to do anything outside. 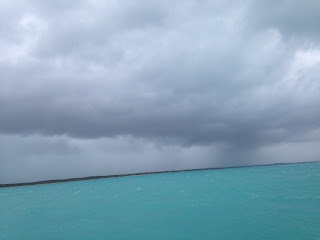 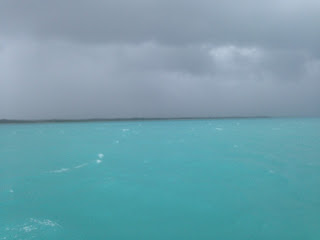 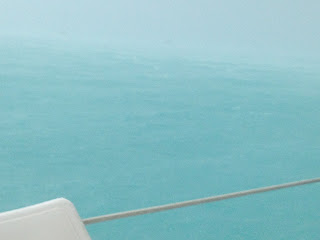