Today we sailed to Georgetown.  We had 20k winds with some gusts to 25k.  So it was a “festive” sail, as another boater calls it.

We anchored by town so we could run errands without getting too wet in the dinghy.  There were about 200 boats here.  We’ve never been to Georgetown this early in the year.  Many people come here and stay the whole winter, like going to Arizona with your RV.  Too many people for us!

Dave left me at the grocery store while he bought fuel and beer.  He was also on a mission to find a new pole spear.  The one he had was fiberglass and was splintering.  Well, he found the deal of the century.  They had 2 at Top to Bottom.  Both are aluminum JBL.  One is 6 foot fixed and the other breaks down into 2 foot lengths, so it can be 4 ft or 6 ft.  2 tips came with the break down spear, rock tip and a 3 prong paralyzer.  And the fixed one didn't even come with a tip.  He wasn't sure if the ones we had would work, so he bought a break away tip for that pole.  He was a little sheepish telling me about what he had spent.  He had been looking at them on Amazon.  And we would have had to have someone check a bag to bring them to us.  So he spent a little more, but we have them to use now and we each have one.

We also have 3 Hawaiian slings.  But you have to retrieve the spear.  You can shoot a fish from farther away, but the fish could take off with the spear.  And if it is in the water struggling for awhile, it will alert a shark or barracuda.  The pole spear has an elastic band attached that you use to shoot the spear.   You can’t use any dive equipment to spear fish in the Bahamas.  We snorkel and keep the dinghy nearby to get the fish out of the water asap.  Now we are set!!

We took the dingy to a boat ramp closer to the Catholic Church to check on the time of mass on Sunday.  I need to document that in my blog so I will know when I return.

There is another grocery store on this side of town.  Dave also went there while I stayed with boat.  He found milk and cucumbers, 2 items that they were out of at the other store.  While he was there, an old guy was in the store and was obviously drunk.  Everyone at the check out seemed to know him.  They asked him what he was going to do for the rest of the day.  He said he was going home to make babies.  Dave said the tellers and other customers all started talking about how guys can do that, even when they get old.  And they were giving him a bad time about it.  Probably wouldn't hear that conversation in the states. 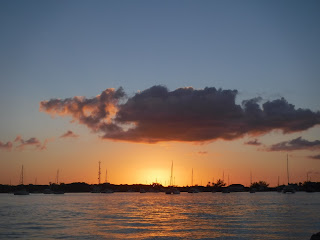 Posted by svluckofafool at 10:14 AM