As you can imagine, I didn’t sleep well last night.  Our hotel didn’t have a breakfast or even coffee in the room.  I walked to the gas station next door to get coffee and a can of fruit. I had brought a few breakfast bars.  Of course, I didn’t have any silverware, so it was a little messy eating the canned pears.

I turned on the TV and started all over again.  Alma was under Tropical Storm watch and possible flooding.  Still lots of storm surge predictions, which means our boat could float off of the stands and end up who knows where.  So I started in again with the texts to Dave.  He finally sent me this text “they don’t know for sure yet.  Don’t fret.  I know what can come.  Don’t keep feeding it to me Please Please Please!”

Dave thought I was just trying bother him because I was upset that he didn’t come with us.  But I was actually worried about him.  I then realized that I was getting caught up in the TV hype.  We know that they always project the worst, so people will be prepared.  BUT they also make it sound sensational so people will stay tuned and their ratings will go up.  So from that point on, I decided I had to be supportive.  In the worst case scenario, I didn’t want our last conversations to be a fight.

Late morning, the 3 of us went to McDonald’s for breakfast.  Then we went to a local grocery store to pick up a few items to eat in the room.  As the hurricane moves closer, we are sure to get heavy rain and winds.  We are only 60 miles inland.  And we weren’t sure we wanted to go  out later.  There was a chance that we would lose power or the water wouldn’t be safe to drink.  So I picked up some things that didn’t need refrigerating, or that I knew we would eat back at the boat. 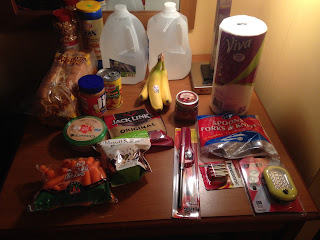 I also picked up a cheap flashlight.  I wished I had brought one with me.  It needed D batteries and the store was out of them.  So we stopped at a dollar store (no luck), then a hardware store.  They didn’t have D batteries either, so I bought an nicer LED light and some AAA batteries.  The atmosphere was like people stocking up before a blizzard.  The big difference was that the people were displaced from their homes.

We headed back to the rooms by early afternoon.  I thought I’d take a nap, but that didn’t go so well.  I had lots of people calling or texting to check on us.  I have to share what our friend, Richard Perdue said to me.  He is the one that taught us to sail and started us on this crazy journey.  He said, jokingly of course, that I should start on my personal ad.  That this would be my chance to move up to someone better if something happened to Dave.  When I told another friend of ours about that, he said “be sure to include: extremely tolerant” as a trait!

About 3:30, Brenda came over to my room and I taught her how to play cribbage.  She beat me in the practice game and in the game on her own.  We were getting some steady rain this afternoon, and the wind was picking up. 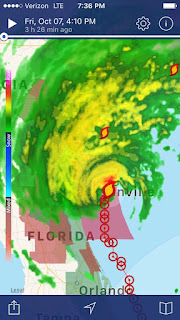 We just stayed in our rooms and ate our hurricane provisions.  I checked in with Dave about 7:00pm.  He said everything was great.  The eye of the hurricane looked like it was off the coast from Jacksonville about that time.  Since it turns in a counter clockwise motion, and we are west of the eye, we are getting winds from the north.  Our boat is on the north side of the boatyard with only short trees behind us.  That also means we didn’t expect flying debris from the boatyard to fly towards our boat.

He said he was awake last night at 2:00am, so he took down our bimini.  He left the dodger up.  That covers the hatch that we open to go below, like a windshield.  He thought it would give him some protection if he wanted to stand outside to look an the weather.  And it would prevent the rain from coming in the hatch.  Then he rigged up a spider web of lines to hold the bows together and stabilize the solar panels.  He treated it like a tent in strong winds when you are mountain climbing.  Everything felt nice and snug, “as still as a church”.

When the rain soaks into the ground, the stands holding the boat can sink a little.  So he was periodically checking the stands and adjusting them to keep them in contact with the boat.  And of course, he was continually checking weather sources.  He would take a walk around the boatyard when the weather was clear.

Dave had taken the dinghy off of the ground and hung it along side the boat.  He didn’t want it to float away if there was flooding.  If there was surge/flooding over 6 feet and our boat floated off of the stands, he may have been able to use it to escape.  But only if the conditions were right.

It had been raining heavily all day.  By late afternoon, the boat yard started flooding.  The boat lift is at the water’s edge and the lowest area.  The ground slopes up from there throughout the boatyard and is 6 feet higher once you reach the road.  Our boat is about half way to the road.   Dave thinks the deepest the water was at our boat was about 1 foot.  He judged that by having to stand on his tip toes to keep the water from spilling into his rubber boots, his “Wellies”.  At the lift, it flooded about 4 feet deep.  The older couple, Rosie and Larry, were wading through the water trying to grab dinghies, tool chests, etc.  I told them later that I thought they were crazy to be doing that.  They felt like they were doing their part to help salvage things.

Jeff, the maintenance man, decided to leave because his power was off AND his stove was crackling and smoking.  HIs home and shop are at the water’s edge, so it was even deeper there.  And at that point, they all thought the water would get higher.  He asked Dave to check on his parrot when he could.  He also asked Dave if he had something to weight down the cage so the table it was sitting on wouldn’t float.  Dave  used an anchor and chain and a rock.  And the bird patiently waited for Dave’s finger to enter the cage, which it did.  By the way, the bird bites.

As the water was receding, one of the boaters was cooking food for anyone interested at the shower house/shop/laundry area.  I guess it was a gathering of survivors.  Everyone was checking on each other.  Everyone was wearing their rain gear and having a great time.

By early evening, the hurricane had been down graded to a category 2, and it was staying off shore. Thanks goodness!  Dave said he was in the middle of “text mania” right now and would call later.  Besides friends and family, he had other people from the boat yard checking with him about their boats.  And we had friends with a boat in the water about an hour north of here that wanted to know how things were looking.  Dave told them that he had always wanted to be a harbinger.  They replied “harbinge away”.  He never lost his sense of humor.  It was good to see that he was calm about the whole thing.  He said the weather actually felt calmer that evening.

We talked about 10:00.  First he sent me this text “Adrian’s boat that he let’s Brenda ride on, looks good.  I just did my bedtime walkabout.  That’s Botswana talk”  I had just told him earlier today that Brenda had grown up in Botswana and met Adrian there.  They later lived in South Africa and left from there on their sailboat.  Fascinating story.

My NOAA radar showed the hurricane just hanging off the coast from Dave.  It seemed to have stopped moving.  He was going to try to get some sleep.  He wanted to be awake around 2:00 am when it was high tide again.  That’s when everyone expected the worst flooding.  I wished him luck.


Posted by svluckofafool at 9:35 PM