We didn’t get hit with a squall until 6:30 am.  We both got up to shut windows and couldn’t really go back to bed with the rocking and rolling of the boat.  There was a small yellow sailboat tucked up closer to the shore.  Dave noticed through our windows that it was really bouncing around more than we were.  Pretty soon, we saw the yellow boat alongside ours with a person from another boat in their dinghy along side them.  We thought his anchor was dragging on the bottom, but after a closer look, realized his anchor rode had broken.  So the boat was drifting free.  Dave hopped in our dinghy to see if he could help.  By the time he reached them, the small boat took off for town.  So Dave visited with the other boater in his dinghy.  He told Dave that he had to pound on the boat to get his attention.  It appeared as though he woke him up.  How he could have slept through that, I don’t know.  The guy didn’t seem too concerned about losing his anchor and took off to get a slip in a marina in Spanish Wells.  So Dave and Phil, the other boater, went towards shore to see if they could find his anchor.  They had a chance to visit, but never found the anchor. 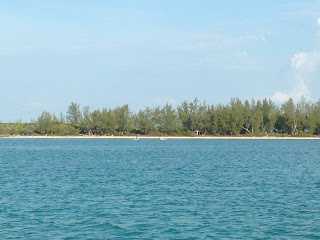 When Dave returned to our boat, he relayed the story to me.  He said Phil always feels like “what goes around, comes around” and will step in to help other boaters.  So then Dave broke into song “to help another boater is to see the face of God!”  We decided we would come up with a list of songs for our own musical “Les Bateaux Miserables”.

Early that afternoon, Phil came over and invited us to their boat for happy hour, or for sundowners as many boaters call it.  Boaters bring their own beverage of choice, since most boats don’t stock an assortment or extras.  And you bring an appetizer to share.

We had a late afternoon squall pass through, so it was close to 6:00 by the time we went to their boat.  They have a 35 foot boat, so their cockpit was cozy.  Phil and Teresa’s boat is named Sea Ya.  Dave remembered seeing it in Georgetown.  Phil had a British accent and Teresa had a southern accent.  So one of the first things I had to find out was where they were from.  Phil is originally from South Africa, but he had to leave there for political asylum when he was a supporter of Nelson Mandela.  He even wrote a book, Asylum, using Hugo Thal as his pen name.  Teresa was a retired middle school math teacher from North Carolina.  For years she had been telling people that she wanted to live on a sailboat, even though she had never been on one.  They met in North Carolina a few years ago and have been living on the boat almost one year now.  They were a very interesting and fun couple.

We talked about being in Georgetown about the same time.  They told us they were anchored in front of the Peace and Plenty resort.  I asked if they saw the boat Catitude that my friend Cheryl was on because that’s where they were anchored.  They said yes.   They met Ed in the Abacos.  Ed wanted to pick up crew to help him bring his boat to Georgetown to meet them.  Well, his crew was Cheryl.  Phil said he met Cheryl in Georgetown and liked her.  Teresa had flown home and didn’t meet Cheryl.  The sailing world really is a small world.

We laughed a lot about how Dave and Phil think alike and how Teresa and I think alike.  We talked and snacked way past dinner and past sunset.  Before we left, we invited them over to our boat for a fish dinner the next night.  We were thawing a couple bags of fish and thought it would be fun to share it with them.  When Teresa found out we had a 43 foot boat, she was wondering why we were meeting on their boat instead of ours :) 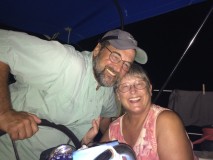 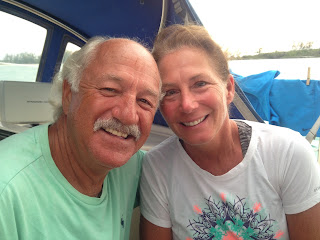 Posted by svluckofafool at 6:50 PM