I relieved Dave after midnight.  He said there had been a few ships in the Gulf Stream.  When I took over, I could see with our AIS that there was a ship that would cross our path at an angle.  The AIS told me when we would cross paths, but I wasn’t sure if we would be in front of it or behind it.  So I played around with our speed and realized that if I sped up, he would cross behind us at a safe distance.  As it got closer, more information showed up.  It was the Disney Cruise ship.  So it was probably heading into the Cape Canaveral port. 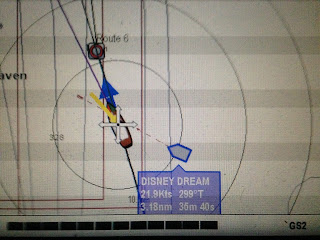 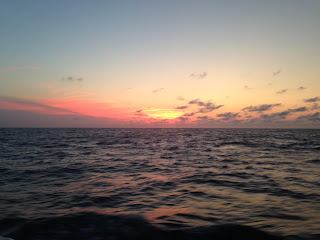 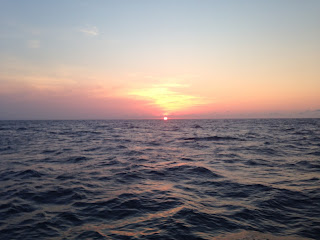 We were able to sail for most of the morning.   We had a perfect angle to the wind.  And the wind was stronger than had been predicted.  Since we were in the Gulf Stream, we were sailing at about 10k.  Usually we are lucky to get 7.  The Gulf Stream usually adds a 3k current.

Dave likes to be at the helm, so he stayed there most of the day with a nap in the afternoon.  I usually keep us fed, nap and read a lot.  During the day, he added 10 gallons of fuel to our tank from our jerry cans on deck.  He also had to move the dinghy.  It was hanging on our davits, but rubbing against something on our stern.  About 4:00, we took down the Bahamian courtesy flag.  The wind really beat it up this year.  I went to bed early again to make it through another night.  This routine has worked out for us.  We get 4 or 5 hours of sleep at a time.  When we used to do 3 hours shifts, we were always tired.
/disney ship sunrise , peeing, taking down flag 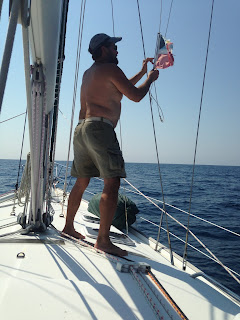 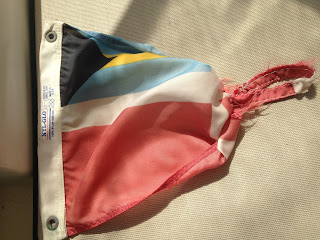 Posted by svluckofafool at 4:05 PM