It was nice and calm this morning.  It made for a nice dinghy ride to shore for church.  Some days you get sprayed with salt water.  I went to St Ann’s Catholic Church in Rock Sound that I attended in March.  They had all the mothers in the church come forward for a special blessing.  There were about a dozen.  Then they presented each one of us with a  tray of fresh fruit.  I was so tickled.  Fresh fruit is so expensive in the Bahamas.  We have bought bananas and apples.  Otherwise, we have been eating canned peaches, pears, or mandarin oranges.  And a consumable gift is the best on a sailboat, since it won’t take up space for long.

We had made lunch reservations at Rosie’s North Side Restaurant.  We had heard good things about her place on the ocean side of the island about 2 miles away.  The best part is that she will pick you up and return you to town.  When I called her yesterday, I asked if she would be open on Sunday.  She had to think about it a minute, asked how many people, and then said yes.  She said she had jerk chicken and BBQ ribs, if that was ok.  Sounded great to us, we would probably do one order of each to try them both.  Then she said she had fish and conch, too.  So I asked if she wanted us to choose right now, and she said no, we can decide tomorrow.  Then we discussed the time.  I said we could be ready anytime after 11:00.  She would be attending church and wondered if 1:00 would be OK.  She also invited me to join her at church.  Then we decided where to meet and that she would be driving a Toyota Corolla and that we would see her teeth before we see her face.  And she said she could be late, not to worry, it’s “Bahamian time”.  She was so friendly!

We waited until about 1:45 and were just beginning to wonder if she forgot about us when she showed up.  She apologized.  They had a visiting minister and he was still preaching.  She left before the service was finished.  She wanted to swing back by the church to pick up a friend.  Miss Margaret joined us.  She was celebrating Mother’s Day and her birthday.  We stopped one of her daughters in the road on the way out of town to ask her to join them for lunch.

We took a paved road across the island, but turned north on a gravel road that lead to her restaurant/home.  There was no way we would have found this place if we had walked.  And about half way there, we may have turned back.  Her place sat on a bluff over looking the ocean side of the island, very beautiful view!  After a few minutes in the kitchen, she took off for town to pick up a couple more people.  She had Miss Margaret serve us water while we waited.  She returned with a man and a woman.  We thought they were together, but later figured out they weren’t.  The man  was a tiny black man named Shorty, and he was pretty quiet.  The lady was Gear, “just like in a car”.  We visited with her and Margaret about their families and about living through hurricanes on the island.  Then Margarets daughter and 3 children came to join everyone.  She introduced us as her new friends, Miss Mary and Mr Dave.

Pretty soon, Rosie starts bringing out plates for everyone.  She served Dave the jerk chicken with peas and rice, potato salad and coleslaw.  She served me BBQ ribs, peas and rice, coleslaw and Bahamian macaroni and cheese.  That’s exactly what we would have chosen, if she had actually taken our order.  We just giggled to ourselves and enjoyed the great meal.  It was like being at someone’s house for Sunday dinner.

After we ate, we asked her if we had time to walk on the beach before she took us back to town.  She told us to take all the time we wanted.  There was a wooden stairway going to the beach of about 30 steps.  Dave went ahead of me to test them out.  We only saw one other house from the beach.  It was pretty isolated and beautiful.

Back at the restaurant, we settled our bill.  She gave me my dinner for free because of Mother’s Day.  We threw in an extra large tip, also because she gave us a ride.  We were the first ones ready to head back to town, and Shorty rode with us.  She went a block out of her way to show us the Blue Hole park in town.  It is about 600 feet deep and about 100 yards in diameter.  I saw it in March, but Dave didn’t.  It was only about 4 blocks back to the dock, so we decided to get out to look closer at the Blue Hole and walk back. 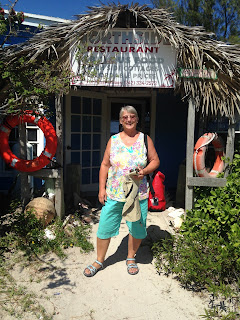 I had a great Mother’s Day! 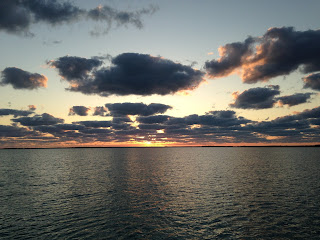 Posted by svluckofafool at 2:57 PM