This morning we headed to Eleuthera.  So far the snubber is working fine and the hole in the side of the boat isn’t leaking.  Whew!

We left our anchorage at 8:30 am.  We had to actually go about 2 miles west before we could go north east to our destination.  We had to go around a sand bore to get to the cut between the islands.  We learned about sand bores last year.  They are described as fluid, shifting, live sand bars.  They constantly shift with the tide, so depths change.  You have to give that area a wide berth, since the depths can’t be charted.  In the Bahamas, there are many areas where they recommend VPR navigation-visual piloting rules.  That is when you are in an area with coral heads or rocks or sand bores and you have someone out on the bow helping you navigate through them.  We have done that several times.

Once we rounded the sand bore, we headed back east.  We went through the cut with an ebb flow.  That means the tide was going out and we could feel it moving the boat through the cut.  We had our main sail up and were motoring at an rpm that would normally move us at about 5-6 k, but we were moving at 10 k with the current.  It was like a speeding car for us!!  Wheeeee!  There was an area where the current flowing out was against the waves coming in causing “confused water”, but the winds weren’t too strong today and the cut was wide, so it didn’t seem as bad as some other cuts.

We had a great east wind at about 15 k all day that made for a great sail to the northeast about 45 nm.  About noon, we decided to start the engine.  We were going to cross paths with a freighter.  So we powered up to cross in front of him while we had plenty of room to spare.  We could see his speed and destination on our AIS, automated identification system.  We noticed that he slowed down a bit when he saw what we were doing.  If there had been any doubt, we would have contacted him on the radio.  Or we would have passed behind him.  They always look much closer on the chart than in real life.  I’m not sure I would have been comfortable with crossing in front of him at night.  You never know if their boat is on autopilot or the skipper could be taking a nap.

We crossed the Exuma Sound to get to Eleuthera.  It always amazes me when I see how deep it can be.   We’re talking 5000 ft at some points.  Dave noticed, as we approached the shore, in about a 50 foot stretch, we went from 1000 feet deep to 50 feet to about 20 feet.  That’s quite a shelf.  Other people usually catch fish along those shelves.  But not us!  Not a single bite today.  Actually, fishermen will track back and forth along the shelf.  So it’s real lucky if you catch a fish just crossing it.

It  was about 3:45 when we entered Rock Sound Harbor.  But it was 4:30 by the time we anchored just outside of the town of Rock Sound about 5 miles in.  We made it in 8 hours.  It was a nice day on the water despite the fact that we didn’t catch any fish, AGAIN.  We spent a week here in March.  It is always a nice feeling when you anchor in a familiar place. 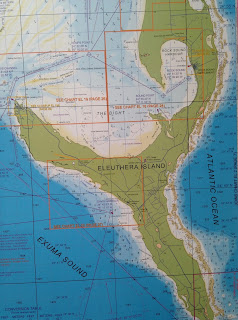 Posted by svluckofafool at 4:26 PM