We had talked about moving the boat to Bell Island to have protection from the west.  But the bad weather may last until Saturday.  So we decided to go further north to Warderick Wells Cay.  We’ll spend a couple nights here, then go over to Rock Sound, Eleuthera for better protection from the wind and to extend my immigration permit.

Warderick Wells Cay is the headquarters of the Exuma Cays Land and Sea Park.  This park is 22 miles long and extends 4 nautical miles on either side of the cays.  It includes 15 major cays and many tiny ones.    We had stopped at the northern end and the southern end last year and explored those areas.   We anchored at Warderick Wells last year, but only to stop for the night.  So I have always wanted to return to this area and explore it further.

Before leaving this morning, Dave placed a screw in the hole in the hull and sealed it with butyl rubber.  This was a stronger patch than the butyl rubber alone.

As Dave was removing our snubber off of our anchor chain this morning, the gate that closes over the metal clasp of the snubber came off in his hand.  He has another one on board and will replace it.  But he thought that was a good thing to happen while we were in calm seas instead of during the middle of a storm when it would be under stress.   The snubber is a rope with a clasp that goes from the deck to the anchor chain.  It takes the stress of the boat moving up and down with the wind and waves instead of the chain pulling on the windlass that is used to raise it.  So Dave was emphatic that this was a good thing to find now and not a bad thing.  (We weren’t going to go with the “bad things happen in 3’s” rule).

Just before leaving our anchorage, we decided to stay on the bank side instead of going back out on the Exuma Sound.  We forgot how beautiful the water was with the different depths.  The water averaged about 15 feet in depth compared to over 1000 ft deep in the sound.  And we avoided going out and coming back in through the cuts between the islands.  Some of them can be tricky if you have wind and current opposing each other.  Not to mention the waves breaking over the rocks that make you nervous should you lose engine power for some reason.

We had a beautiful sail all the way today.  It was only about 25nm.  The wind was about 15k and we sailed between 6.5-7.5k.  That’s faster than we can motor.  We were enjoying it so much, we almost turned around just to sail a little longer after we arrived.

We anchored by 1:30, had lunch, then went exploring.  We took the dinghy to the southern end of the island to snorkel in a channel between Warderick Wells and Hog Cay.  This area was know as a Pirate’s Lair at one time.  We snorkeled in search of Stromatolites.  Only trouble was, we forgot to google what they looked like before we left this morning.  And we weren’t near any wifi towers in the park.  So we never did find what we were looking for.  But we had nice swim.   I later read in our guide book that they are the oldest evidence of life on earth.  They are fragile flat grey reefs that date back 3.5 billion years.  They were thought to be extinct until discovered in the Bahamas in 1983. 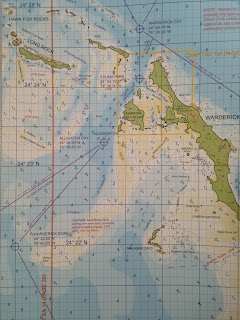 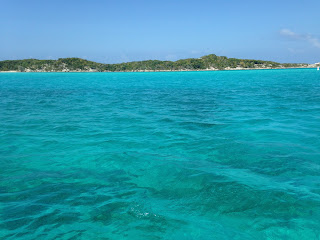 Back in the dinghy, we explored a few other reefs that we will snorkel tomorrow.  We have a 5 gallon bucket with a plexiglass bottom to look under water.  It is like putting on a dive mask.  There weren’t very many boats anchored in this bay.  So we had a quiet night enjoying the sunset, again. 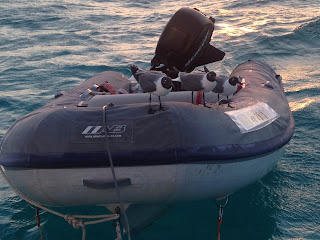