Today we took a dinghy ride around Galliot Cay.  It is on the west coast of Long Island.  If you go at high tide, you can make it all the way around the island.  We entered Joe Sound at the south end of the island.  There were anchorages inside this narrow channel, but we didn’t think we would chance getting our boat in or out of this narrow, shallow channel. 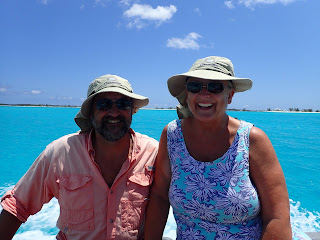 Once we were behind Galliot Cay, there were large shallow areas called flats where bonefish are common.  They are a sport fish that are easily spooked.  From the people we saw bonefishing, it looked like a game of patience.  They draw many tourists to the islands and Florida.  We ran across a local fisherman and asked if we could make it all the way around the island.  He thought we should have no problem with high tide approaching.

Shortly after seeing the fisherman, we caught a fish ourselves.  We had been trolling from the dinghy.  We caught a nice jack fish about 15 inches long.  As we moved further north, Joe got out of the dinghy and pulled us through a shallow area.  The dinghy would float, but the outboard would hit bottom.  We later found out that when you walk and stir up the sand, the shark come to look for fish.  Good Joe didn’t know that. 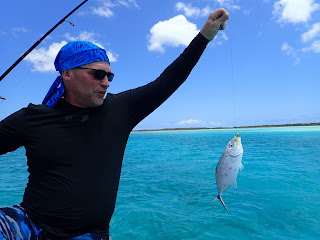 At the north end of Galliot Cay, we had to go under a bridge.  It was narrow and the water was moving though it pretty fast in our direction.  After checking it out for a short time, we headed through.  We had enough horsepower to power up against the current.  Dave figured we could push off the walls if it started to turn our dingy.  But under the bridge, there were nails sticking out of the cement walls.  So we had to be careful not to puncture the dinghy.  On the other side, there were several docks.  So we tied up and took a walk to check out the town of Seymours.  We walked a long ways in the wrong direction and didn’t find anything.
Back at the dinghy, we continued into Hoosie Harbor.  We found another ramp/dock closer to civilization.  I guess that was where we should have landed.  By now it was getting closer to sunset, so we didn’t stop.  Back at the boat, we grilled our jack fish and shared it as an appetizer.  Then we grilled chicken for our dinner.    Erin and I took a dip in the water to cool off and try out my floaties. 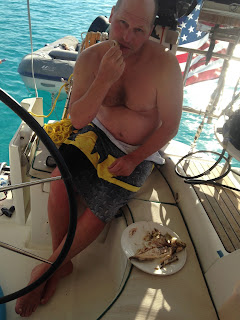 We had read about the Sunset Restaurant in Active Captain.  It was recommended by other boaters and reservations were also recommended.  So we called them to make reservations for lunch on Friday.   The owner had to check with his cook and call us back.  When he called back, he said that would work.   Then he asked me what we would like to have.  I wasn’t sure what to say.  So I asked him what they are known for.  He said their grouper, crawfish (lobster) and conch.  He said he could make conch salad and then a platter of the grouper and crawfish, so we could try both.  Sounded great to us.  Then as we talked a little longer about directions and that we would be coming by dingy.  He then asked “were you in your dingy today behind Galliot Cay?”  He was the man we saw fishing and asked for directions.
Posted by svluckofafool at 12:13 PM