Cheryl decided to go to church with me this morning.  Cheryl also took a load of laundry to 3T’s, so we left early.  She dropped them off and asked “Showboat” if he would move them to the dryer for her.  He would if she promised to pray for him.

The church was St Ann’s, which is the name of the church I grew up in.  We had a Palm Sunday procession outside along the side of the church, to the parking lot and back inside.  Part way though the mass, a cat came into the church from behind the altar and walked out across the altar, down a few rows and back onto the altar.  Then an altar boy picked him up and took him back outside.  Funny.
Hopefully, this video works.
<iframe width="420" height="315" src="https://www.youtube.com/embed/_oDSzmEZj2I" frameborder="0" allowfullscreen></iframe> 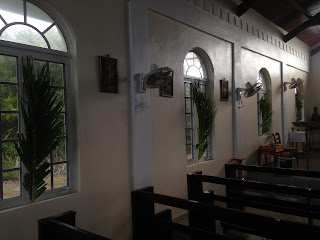 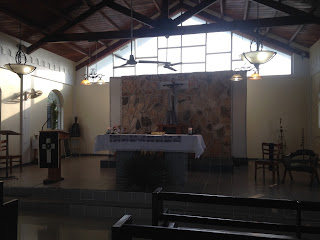 After mass, we met Debbie and Fred from Cincinnati.  They are on the sailboat Early Out.  Nice couple about our age.  They had sailed here from the Exumas because there aren’t very many Catholic churches there.  And they planned to spend the holy week here. 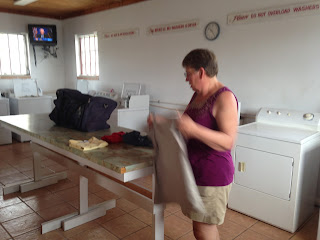 We thought we were going to leave for Cat Island on Monday, but we decided to stay in Rock Sound to work on projects and wait out bad weather.  Another reason to stay was that I could be near a church for Easter Sunday.  I found out later, just because there is a church located in a town doesn’t mean there will be a priest for mass.  We moved the boat across Rock Sound Harbour to west side for better protection from the winds.