We had a relaxing morning eating pancakes made by Cheryl.  Then we sailed across the northern part of the Exuma Sound to the Glass window.  This was a natural land bridge between the deep dark blue ocean side of Eleuthera with crashing waves and the calm aqua blue shallow waters of the Exuma Sound.  Over the years, the land bridge was destroyed and a bridge was built.
Cheryl and I took the dinghy to shore and spent a couple hours exploring.  We hiked up the hillside from the beach to the road.  We could hear an odd sound of water crashing inside a cave.  Then we came across a hole in the ground about 6 inches in diameter near the road.  You could hear the booming under ground and then the water would spout out of this hole like a geyser.  We tried to video it, but it didn’t do it justice.

We climbed around the rocks for a couple hours.  Just beyond the bridge, on the north side, there was an area that opened up and had several natural tide pools called the Queen’s baths.  A couple were large enough to sit in.  Others were small pools of salt where the water had evaporated.  At first they looked like frost to us.  We enjoyed just sitting and watching the crashing waves and the color changes in the water. 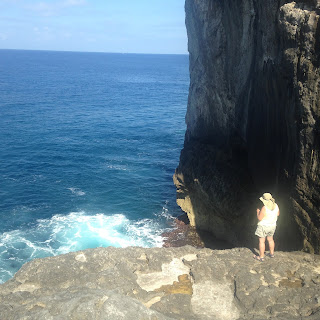 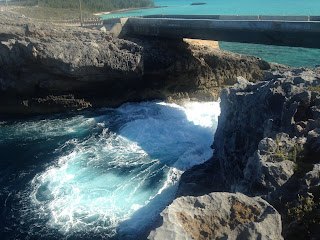 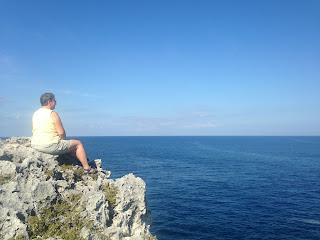 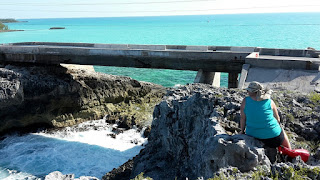 Back at the boat, we decided to have a few cocktails before dinner in honor of St Patrick’s Day.  We thought of our son, Peter.  He plays in an Irish band, The River Liffey Boys, and was surely having a grand time back in Rapid City.  Brilliant!!
Posted by svluckofafool at 1:23 PM