We left our anchorage at 5:30 am in the dark.  Thank goodness for radar.  We motor sailed to Eleuthera, about 50 nautical miles south.  Since there were light winds, Cheryl and I spent some time below logging the food she brought aboard. (I have all of our food logged in an app on my phone called What’s on my Boat.)

We made pretty good time and were at Egg Island by 2:00.  We talked through our options of where to anchor and what our plans were for the next couple of days.  Funny how part of our plans involved where we could dispose of our garbage.  We decided to skip Spanish Wells and head towards Current Settlement, anchor, and go through the Current Cut tomorrow.  Dave had fishing lines out and had caught a Mackerel as we were heading to Current Settlement.  As he brought it in, he noticed that the tail had been bitten off and there were teeth marks on the side.  He brought it on board and wrapped it to clean it later. 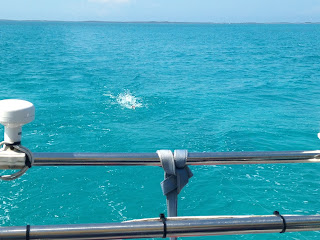 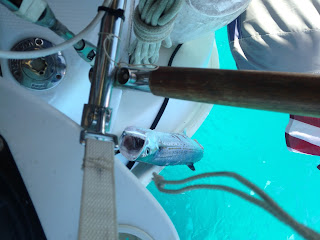 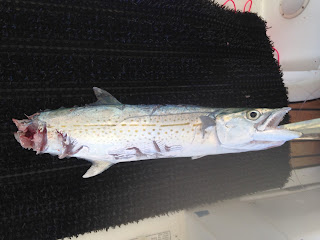 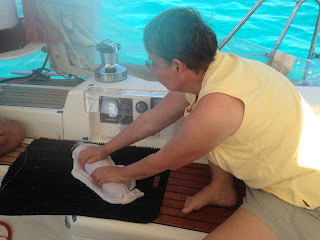 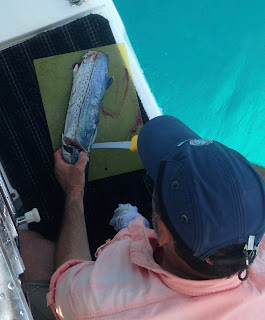 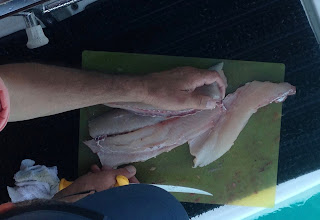 The Current Cut sounded like it was tricky.  You have to time your pass with the tide and the wind and it’s best to go through it at slack tide. When we looked at the tides, we decided the best time to go though the Current Cut was today.  High tide was at 5:30pm and was going to get later by an hour every day.  We figured that slack tide was 2 hours before high tide which was right now.  So we went for it.  We had Cheryl out on the bow watching for deep water.  Dave was following our chart plotter and I was following Bluechart Garmin on my phone.  I also relayed anything Cheryl was trying to tell us.  Our pass through the cut went well. Yeah team!

We anchored off of Current Island south of the cut.  We helped Dave clean the fish and thought it was a Spanish Mackerel.  It was about 3 ft long and we think we had 2-3 pounds of meat. We had a fantastic dinner and pigged out eating the whole fish! 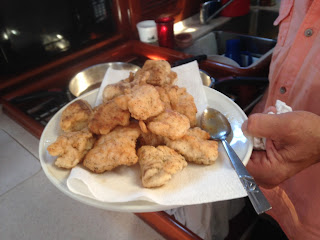 Posted by svluckofafool at 12:45 PM