SHORT NIGHT!  I had to get up at 3:30 am for my 5:10 am flight.  Aberdeen’s airport is pretty small, so one hour early was fine.  I was expecting problems with customs since we live on a boat.  But not in Aberdeen.  I didn’t think I was going to get a boarding pass.  The guy checking me in said that his computer was telling him that I needed a VISA since I didn’t have a return flight.  I just said “well, I know I don’t need a VISA”  and he printed them for me.  I guess I used “the force”.

The flights were all fine.  When I walked out of the airport to find Rinssor’s taxi, he looked surprised to see me.  He thought I was arriving on Friday and already had a load.  So he lined up another taxi driver for me. James was 86.  He and his wife both drive taxis.  He was originally from an island in the south, Mayaguana, but he had to leave there as a teenager to find a wife.  I guess everyone was related to each other :)
Dave met me at the dinghy dock.  We delivered my luggage to the boat.  Then we stopped at the boat of our friends, Ricardo and Cheryl.  They arrived in Marsh Harbor today.  We visited a short time.  Then we went out to dinner at Snappa’s.  It was nice to visit about the week over dinner.  Then it was early to bed!


DAVE PROJECTS WHILE I WAS GONE
While I was away, Dave got out the Sailrite sewing machine and did a few projects.  He had made a bag for our spinnaker by hand before we bought the machine.  So he restitched the entire bag.  He also restitched our dinghy chaps.  Several of the seams looked weak.  He also used isinglass to make sleeves for our dinghy registration boards.  We only had them tied on before and they would always flap in the wind.  Our Bahamian flag was looking tattered.  So he took it down, trimmed and sewed the end smoother.  You can’t tell that it is smaller when it is flapping in a breeze or hanging limp. 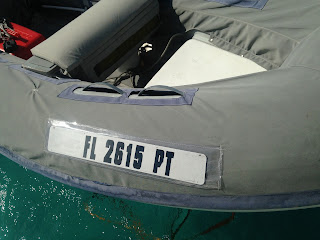 Dave also worked on the aft head.  The handle to pump out waste had come unscrewed when Dave’s brother was visiting.  Dean had put it back in place, but an o-ring wasn’t centered and was damaged causing water to leak.  So Dave took that apart, placed the new o-ring and put it back together correctly.

He also did laundry and had to cook for himself again.  Kept him out of trouble.


Thursday, March 10 Flights to the Bahamas
Posted by svluckofafool at 11:03 AM