April 3, 2016 Hermitage on highest peak in the Bahamas

Since the waves at the shore were a little rough, I had Dave take me to shore for church this morning.  I didn’t want to wrestle with the dinghy at the beach.  I followed the directions given to me.  I also met a lady on the street and asked her directions.  It really was easy to find.  BUT, mass was at 11:00, not 10:00.  There was a small alcove at the entrance with a concrete bench inside in the shade, plus a nice breeze off the ocean since it was on a hillside.  So I had a place to wait.  When the people arrived to open the church, I went inside to tour it before sitting down. 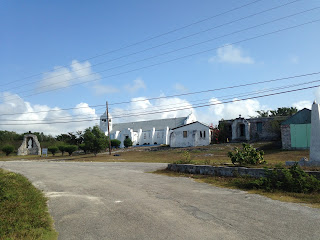 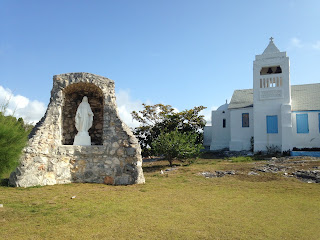 The church was beautiful, hence several pictures.  It was concrete and the windows only had wooden shutters on the outside.  There was a baptism of a girl about 8-10 years old.  So there were many families with children sitting near the front of the church.  One mother had a switch with her to discipline her kids before mass.  I don’t think I have ever seen that.  It didn’t seem cruel, more of an attention getter.  If Dave ever smacked Pete on the bottom, he told him he was helping to move his brain back into his head.  That was more what this was about, not abuse.  Before the deacon started his sermon, he said he had some housekeeping to do first.  He came out into the rows and moved some kids around so they weren’t sitting together and would behave better.  It worked! 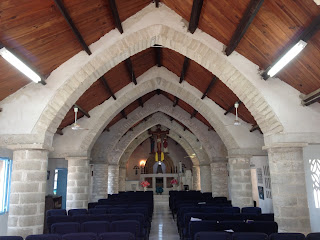 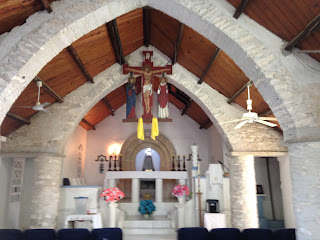 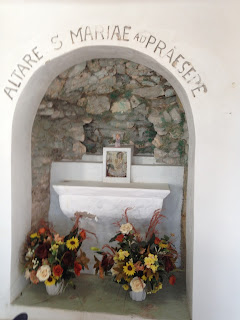 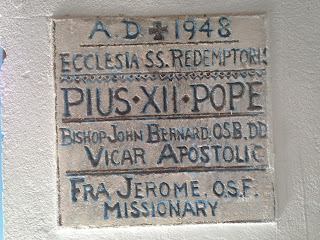 After mass, Dave came to shore to meet me and we went for a hike.  The highest peak in the Bahamas is here, Mt Alvernia at 206 feet.  At the top, there are the ruins of The Hermitage.  An architect named John Hawes who was also ordained in the Church of England lived from 1876-1956.  In the early 1900’s, he lived in the Bahamas.  He traveled the islands and repaired storm-devastated churches and built several churches on Long Island, Cat Island and Nassau.   In 1911, he became a Roman Catholic priest in Rome and went to Australia for many years.  He returned to the Bahamas in 1939 and chose this place to build his retirement home, The Hermitage.  The last section of the hike up the hill also had the Stations of the Cross.  He fashioned his life after St Francis of Assisi with simplicity.  You see that in the Hermitage with small living quarters and a chapel with a bell tower.  During this time, he built the catholic church that I went to that morning.  There was also a fantastic view from the mountain top.  Great hike! 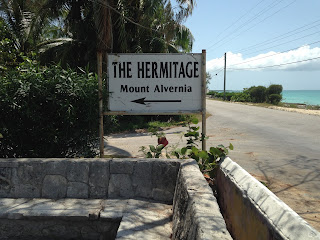 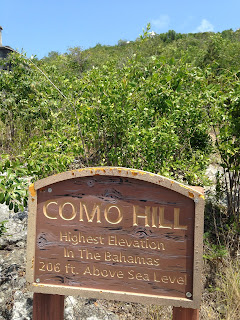 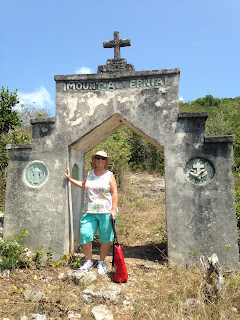 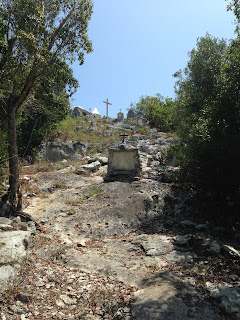 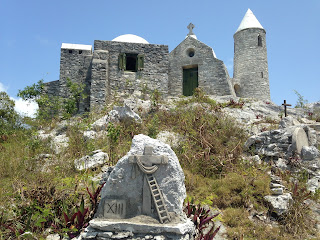 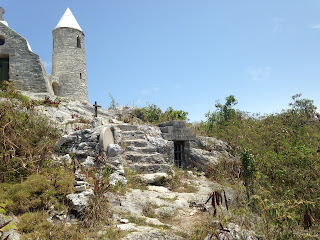 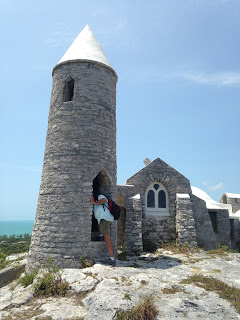 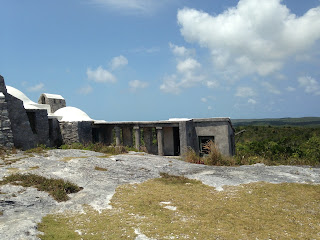 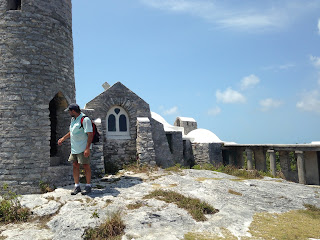 When we returned to the shore, our dinghy was swamped from waves hitting and going over the stern.  We have a hand bilge pump, but we had to use a bucket to empty the dinghy.  Dave spent the evening researching a new plan for taking the dinghy to shore where there are waves.

For myself, I wanted to go swimming.  The water is so clear right off the boat.  I was able to try out my new “floatie”.  I bought a mesh seat with a small ring that needs to be inflated back in Florida in October.  This was the first time I tried it in the ocean.  Loved it!  You can sit in the water, but still float. 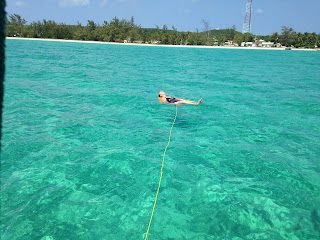