We spent the day in and out of Georgetown doing our civilization chores.  We went to shore together by dinghy about 9:00.  Dave dropped me off with a propane tank to refill and with my computer to get a good wifi signal.  Then he went to a dock at the gas station for diesel and gasoline.

I stopped at Forbes to leave our propane tank to be filled.  Another gentleman was waiting and  told me the owner would be right back.  Once he returned, we paid for the propane, $22 for a 10 lb can, and were given a receipt for the pick up between 1:00 and 2:00.  We have paid closer to $15 elsewhere in the Bahamas.  But we didn’t have to walk far with it, so I guess we paid for the convenience.

Then I walked to J&K Productions to use their wifi.  They open at 9:00, but it was 9:30 and they were closed.  So I caught Dave at the fuel dock and went back to the boat with him.
We did a few projects on the boat and went back in at about 11:30.  We decided to have lunch together and tried out a local restaurant.  The Towne Cafe was tucked in beside the gas station, off the main street.  They had 3 main courses served over rice with 2 sides.  And it was served like take out, which they call take away.  But there were about 6 tables inside with air conditioning and a clean bathroom.  So we were excited, no flies!  The choices were conch, chicken or chuck roast.  We both went for the chuck roast.  We don’t see beef very often.  It was DELICIOUS.  It was slices of beef cooked with onion and peppers in a sauce and served over parsley rice.  It was only $12.95, and we could have split the order, which we didn’t.  While we were there, a Mary Kay consultant came if to order lunch.  I had to get her photo for my niece, Heidi, who is a consultant.  She was so cute and friendly. 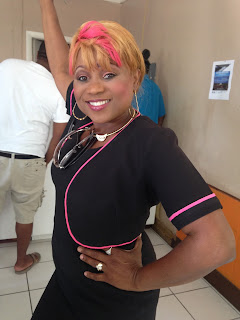 After lunch, I went back to J&K productions and spent the rest of the afternoon using their wifi/$5 per day.

Dave picked up groceries from 2 different stores and headed back to the boat to do some work, or so he said.  Later I had to text him to meet me at the dock.  We also gave a ride to 2 young French people to their boat.  They were helping crew another boat.  One was going back to France and the other was looking for another boat to crew.  Dave likes to practice his French.  They were so adventurous.  They told us about another Frenchman that was here.  He was 24, bought a sailboat and learned to sail.  He had sailed here from France via Greenland and Iceland and down the east coast of the US.  I don’t know how they can afford to be on these adventures.  But it is exciting to hear their stories.

Posted by svluckofafool at 5:59 PM