April 22, 2016 friends leave and Immigration extention in the Bahamas

After the Cruiser’s net this morning, another boat contacted us that we had met in Georgia last summer.  Bob and Nina on Moondancer were here in the harbor.  We explained that we had guests leaving today and would connect with them this weekend.  It is fun seeing boaters you know as you travel.

Joe and Erin’s flight wasn’t until 4:00 in the afternoon.  So they had a relaxing morning for packing.  We all went to town before noon and ate at the out door restaurant, Redboone, right near the dinghy dock.  They were able to catch a taxi right there.   Great time was had by all.

Dave and I needed to go to the Immigration office.  When we checked into the Bahamas January 25, 2016, we were given 3 months on our immigration registration.  So we had to get an extension.  You can’t ask for an extension until the week that it will expire, which would be Sunday, April 24.  We had checked before we left for Long Island on the hours, 9-5 Monday-Friday.  We found the office and were told that the person that does the extension is only there from 9:30 to Noon.  It was posted on the door, but this was our first time at their office.  When we explained that it will expire on Sunday, another person there said he could renew it for us.  He asked for our cards.   He said that mine expired 30 days after I returned by airplane on March 10.  So I should have renewed my on April 10.  I had no idea.  I told them that no one at the airport explained that to me.  He said that it is on your passport stamp and at the bottom of the card.  We had never noticed that the time limit of your immigration registration was written in with your passport stamp.  No other country has ever done that.  He then realized that my passport actually said 60 days.  So the card that said 30 days was wrong.  So Dave was able to extend his, but I will have to return here or to another immigration office right before May 10.  Dave asked for 90 days, but they gave him 60 days because they said it would match mine better when I renewed mine.  That didn’t make any sense, but we weren’t going to argue.  Now mine has to be renewed on May 10 and his on June 26.  That will dictate where we will be over the next 2 weeks.
We picked up a few groceries and headed back to the boat.

We did nothing for the rest of the day.  We didn’t even want to cook and ate leftovers.  We had a great time with Joe and Erin, but it is nice to go back to the boat by yourselves and do nothing. 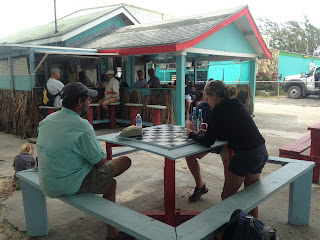 Posted by svluckofafool at 10:46 AM