The guys spent the morning working on our shaft again.  We noticed after our trip across from Georgetown, we had lost the hose clamp that was protecting the set screws on the shaft.  So Dave used the Airline hookah again to place seizing wire over the screws.  He had to align the screw heads to run the wire through the slot on it’s head and around to the other one.   Then he twisted the wire to hold them in place.  Joe helped and took underwater photos.  We may have to purchase an underwater camera.  We have had fun with it this week, besides helping to check out the condition of the boat.  And Dave will be able to send the pictures to Beneteau when we plan to make the real repair. 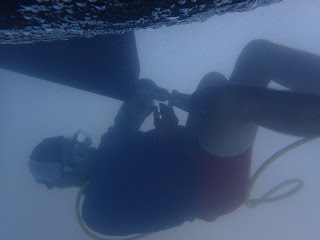 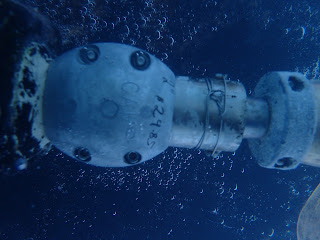 Video of Dave working on the shaft
Erin and I enjoyed a “chick flick” while the guys worked on the boat.  We didn’t think we’d get them to watch one with us in the evening.  We enjoyed Kate and Leopold which Erin had never seen.

After we had a light lunch, we decided to go to shore together to pick up a few more groceries while we were near a store.  This store was better stocked and had better prices than the one in Georgetown.  We didn’t need much, but picked up some tuna steaks and some snacks.

We sat in the shade and had a coke discussing what we wanted to do for the next few days. Joe and Erin wanted to get cash at a cash machine that was about 15 minute drive south of Salt Pond.  Everyone said it is common to hitch hike on the island and they would have no problem.  Joe and Erin offered to rent a car to get to the cash machine and to tour the island.  They figured that was something we wouldn’t usually get to do.  It was already about 4:00, but we could have the car for 24 hours.

Dave and Joe headed to the car rental place across the street.  Erin and I walked to the tourist office to get a map and some information about what to see on the island.  The car rental place didn’t take credit cards.  When Joe explained that he was going to the next town to get cash, he said “no problem, you can pay me when you bring the car back tomorrow.”  I guess he knew we couldn’t go far with the car.

We drove south to see Dean’s Blue Hole.  This is the world’s second deepest known seawater blue hole over 600 ft deep.  There is going to be an international free diving competition here next week.  When we arrived, we saw a diver just getting out of the water.  And there was a platform in the middle of the hole that was being worked on by someone. 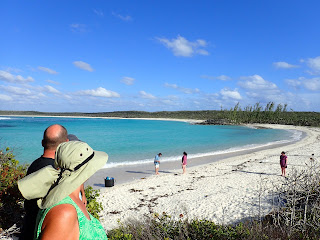 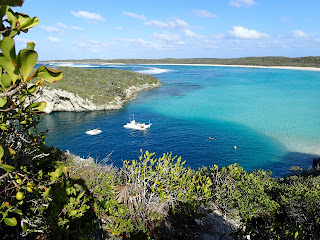 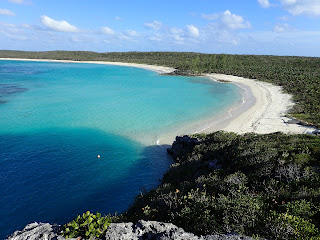 We hiked around the hole on the canyon wall overlooking one side.  As we were heading back, we met two young people also taking pictures.  As we visited, we found out they were 2 of the divers here for the competition.  They were from France and Russia.  Back at our car, a young Spanish speaking woman asked if we could give her a ride into Clarence Town, which worked out fine.  Her boyfriend was working on the platform and was going to be awhile.  She was the national record holder for Mexico and was here for the completion, too.   We asked her all sorts of questions.  Her name was Camila Jaber and she was 20 years old.  Her deepest dive was 65 meters or about 200 ft.  This is done while holding their breath.  They dive from the platform and there is a weight marking their planned depth on a rope.  They don’t try to go beyond the planned depth.  They wear a dive computer on their wrist that sounds an alarm when they are about 3 meters from the maximum depth so they know to return to the surface.  We didn’t find out how that is verified or how the completion actually works.  We’ll do that when we have better access to wifi.  But they do 6 dives, one a day.  And there are different categories.  Very interesting.

At the house where we dropped her off, we met the competitor from Columbia.  All these people were in their early 20’s.  There were going to be about 50 competitors here from around the world.  We’re trying to figure out if we should return next week to watch.  But without a car, it would be difficult to get to the Blue Hole.

We drove into Clarence Town.  There was a lot of hurricane damage here.  It was now after 5:00, so we saw the outside of St Peter and Paul Church on a hillside.  It was one of the churches built by Father Jerome that we heard of on Cat Island.

We drove to the harbor and checked out the Flying Fish Marina.  There was a lot of construction going on.  We walked out onto the docks to look at boats and sharks in the water.  There was even a sign warning people of the sharks.

On the way back to Salt Pond, we stopped at Max Conch Bar and Grill.  It had outdoor seating and we enjoyed a couple cold drinks while waiting for a couple appetizers.  We shard a conch salad between us.  Everyone makes it a little different, so they are fun to try.  While we were waiting for our chicken wings, jerk pork and Johnny cake, the mosquitoes swarmed in.  We got the rest of the food to go and sat in the car.  We haven’t been around mosquitoes like that since summers in MN.  It also helped that there is no open container law in the Bahamas. 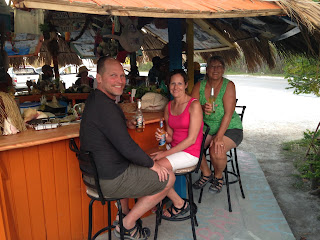 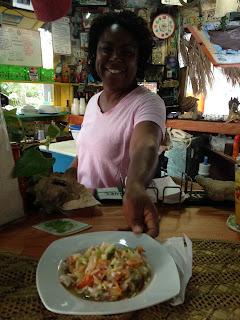