We woke up this morning with no water AGAIN.  One time is understandable.  Two times is annoying.  But three times is unacceptable.   We called the caretaker and told her we didn’t have water again but now we want a different cabin for the last 2 nights.  She said we would have to call the office.  So I did and talked to the owner.  She said she would look at what she had and get back to us right away.  We packed up our things, she called back with a new place and sent our caretaker over with someone to take our luggage just a short walk away to the new cabin, Wyannie’s Landing.  Wyannie Malone was one of the first settlers on the island and their museum is named after her.

This cabin was gorgeous!  It was a 3 bedroom on 2 floors with a full kitchen and living room.  On the second floor there were 2 balconies.  You can see the light house from one and the ocean form the other.  There was a deck out back with furniture and an outdoor shower for when you get out of the ocean.  And beach access over the dunes.  SWEEEEEEET!!

We moved in, made coffee and had a slice of guava coconut bread from Vernon’s grocery store, made fresh there yesterday.  We also called Elbow Cay Properties to thank them for the move.  We had planned to go to the local Farmer’s market at 9:00 less than a block away.  A local lady grows all kinds of greens and sells them to the restaurants and grocery stores.  But occasionally she sells them at this market.  Kaye headed there while Bev and I finished our cup of coffee.  When we got there, there was a line of about 20 people and Kaye was about 6th.  So we looked things over and let her pick up a bag of kale, arugula, and their mixed greens.  They were already out of tomatoes.

We took them back to the cabin and I listened to a recording of the cruiser’s net on Barometer Bob’s website.  The weather sounded really nasty for Sunday.  100% chance of rain and winds 25-35 knots and squalls with gale winds.

I checked with Dave to see if I should return to the boat so we could move it to a safer anchorage.   He didn’t think that would be necessary.  This will be a “good test” of the boat and our anchor.  I told  him if he changed his mind, I would be ready to leave at any time.  Bev and Kaye understood that the safety of our boat was important.

We decided we didn’t want to go to the Super Bowl party at the Hopetown Inn and Marina because it was going to be outside.  And none of us were that crazy about football.  We have a TV, but I doubt that we would be able to get it.  We’ll just check the score online occasionally and have our own party at our huge cottage.

We made a shopping list for then next two days and headed for the grocery stores.  We decided to make a spaghetti dinner tonight with our salad.  And we wanted to make chicken wings for our “super bowl party”.  We would fill in the blanks once we saw what was available.

At the first store, we found the spaghetti ingredients, chicken wings, hot sauce and butter to make our own Buffalo sauce, and an onion and pepper to sauté.  They were so good the first night.  We went to Vernon’s for fresh bread.  But we also found a home made salsa, chips, a hard parmesan cheese, and conch salad.  We had another rain shower while we were shopping, but much shorter than yesterday.  We stopped in one gift shop that was closed the other day.  The lady running the store asked where we were from.  She said her uncle lives in Pierre, SD!  That is where Don and Linda live.  His name was Herard Jean Noel.  He is and instructor at Collegeville which is a branch of St Benedict's out of St Cloud, MN.  He has spent his time between the two places over the last 15 years.  Another small world experience.  the store was called Sand in My Shoes and her name was Hermanette Joseph.  She couldn’t believe we knew where Pierre, SD was, let alone have family there.

We headed back to the cottage with our food and had a lunch of chips and salsa and conch salad.  It was good, but not as good and the one George makes in Marsh Harbor.

After we ate, we went for a walk to a section of town they had missed.  We left our place and walked to the Hopetown Lodge.  There is a beautiful Memorial garden along the way and some nice homes.  Past the lodge, we found a cemetery.  There were dates back to the late 1800’s and recent graves.  There were several old graves that no longer had headstones.  And all of this was with a beautiful view of the ocean.  On the way back, we stocked up on more beer for the weekend.  Beers cost about $2 each, so a 12 pack was $22.50.  But they let you mix them up with at least 3 of the same thing.  Over the week we have had the local Sands light, the Guinness Foreign Export, the local Strongback stout, and a Milk Stout form South Africa.  Today we picked up 3 local Kalik lights.  I just remembered that I liked Sands better than Kalik, but thought Kaye might as well try it.  She agreed that Sands was better.  We like all of the stouts.  Bev is still working on the box of white zinfandel. 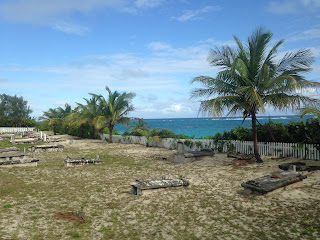 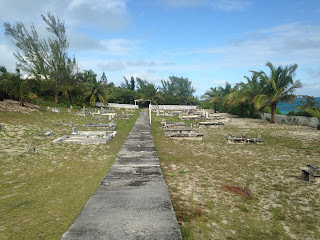 We started to settle in for either a nap, or a book, or me online when Bev suggested we walk the beach.  We have been able to see it every day, but haven’t walked it.  At first I didn’t want to, but decided this was our best chance with the bad weather moving in.  So all 3 of us went.

Once we were on the beach, we were all so glad we went.  It was so peaceful, and beautiful, of course.  There was a kite boarder, 3 surfers, and a few other people walking the beach.  We all agreed that if we had shown people pictures of this beach, the next thing they would ask was “did you walk the beach?”.  We would have felt really lazy and would have been embarrassed if we had to say no.

Back at the cottage, we took turns showering.   Then we made out spaghetti dinner.  We played a game of Triominoes.  After that, we checked out the view of the lighthouse from one balcony.  Then listened to the ocean and looked at stars off of the other one.  We are getting the most out of this cottage.