Checking our many weather sources, it looks like tomorrow will be a weather window to cross to the Bahamas!!!  So it’s time to tie up loose ends.

I made an egg dish in muffin tins this morning that we can just heat and eat while at sea.  Then I called another boating friend that we met in GA, Gloria, to get some local knowledge about the Bahamas.  She and her husband have been going there for years.  She is from West Palm Beach.  We asked her details about checking in to customs at Walker Cay instead of Green Turtle Cay, as we did last year.  We just hope they will be open on Saturday, Jan 2.  We can’t leave the boat until we have checked in.

Today, Dave tore apart the saloon area to chase down a small leak in our CruiseRO water maker.  The pump in question is in the bilge under our dinette table.  He had to take down our table and pull up the floor boards.  There are two long membranes in the shape of tubes about 3 feet long and 4” in diameter that the sea water is forced through by a high pressure pump.  Dave pulled the membranes out into the open so he could check it out and watch is as the water maker ran.  The only thing he found were loose fittings, which could all have added up to the small amount of water we were seeing in the bilge.  So he tightened all the fittings and put everything back into place.  He also noticed that there were a couple hoses in an area of friction that were showing some wear.  So he repositioned those before they could be damaged.  It just reminds you that you have to check things periodically, even if they are hidden. 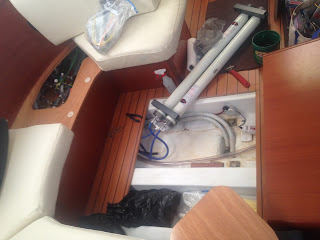 While the water maker was running, he moved on to another project.  Our out board motor for the dinghy is mounted on a piece of starboard on our stern.  We have seen starboard bend and then break with a rudder in the past.  So Dave reinforced the starboard with a piece of aluminum.  He broke a drill bit in the process.  He coated the aluminum with Lanacoat so it wouldn’t rust.

About 6:00 this evening, I was checking with Gloria on one other thing about crossing to the Bahamas.  She answered, but also mentioned that there was a change in the weather.  When Chris Parker’s report come out this evening, he was warning of strong gale force winds that could hit the Abacos by Monday and last all week.

We discussed the pros and cons of leaving vs waiting and decided to sleep on it.