After a quick breakfast, Dave and Alice went to Montgomery, MN to pick up the U-Haul truck.  It is about 15 miles from here.   After cleaning the bathroom, I made coffee for the guys that started to show up to help today.  About 6 men from Alice’s church and her stepson, Joe, all pitched in to help about 10:00 when they returned with the truck.

Dave was the coordinator of the truck.  I threw in a load of laundry of towels and a few of Alice’s things in her community laundry room.  She put it off until this morning because she said “I won’t have anything else to do today”.   Dave and I gave each other a look of surprise when she said that.

Alice had a lease until June 2016.  But there was an older gentleman that was interested in renting her apartment and buying her stove, storm door, and a 2 bar stools.  He kept her on a string this week saying yes, then no, then yes.  Even the management had been talking to him.  But he wasn’t answering any phone calls today.  So I asked Alice if we should go ahead and pack the stove.  She went to check with the manager once more.  Then I remembered that we were going to make a couple frozen pizzas for the guys.  I started heating the oven and was ready to put the pizza’s in the oven when they came in to haul it away.  Boy did I have blonde/grey moment.  I was the one who thought about packing the stove :(

All the guys said not to worry about feeding them.  Most everything was hauled out of the house by about 1:30.  But there were still a lot of things in her garage that she wanted to go into a storage unit in WI that we were going to pack last.  And there wasn’t enough room.  So we let everyone go.  Dave, Alice and I went out for pizza.  We could leave things in the garage and come back later with his sister’s open trailer.  Or we could rent a trailer to haul behind the U-Haul truck.  We decided to go ahead and rent a trailer.

Dave headed back to Montgomery, and we went back to the apartment to tie up loose ends.  I had to focus Alice on packing her personal items and the refrigerator and let me do the last of the cleaning.  It was about 5:00 when we actually left town.

It had been drizzling rain for the last hour, and it continued as we drove our caravan.  Dave was in the U-Haul truck pulling the trailer, Alice followed him, and I followed her.  Everyone was concerned about her having to drive 3 hours after packing since she is 83.  So after an hour, we stopped and regrouped.  We thought about getting a room, but decided to go another 30-60 minutes and see how everyone was doing.  It had stopped raining and we were all wide awake.  We stopped again around 8:00 and had a sandwich.  So the 3 hour tour turned into 5 hours, but we made it to Dave’s sister’s outside of Cumberland by 10:00 pm. 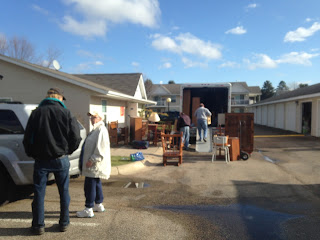 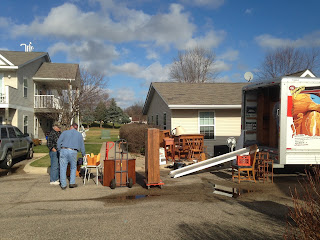 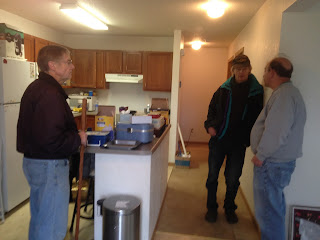 Posted by svluckofafool at 4:44 PM