Happy 41st anniversary of our first date on Halloween in 1974.  I got the trick and Dave got the treat!

This morning, Ricardo tried out his “new” dinghy.  He has been helping an older gentleman on our dock, so he sold him a dinghy with an outboard for $200.  The motor hadn’t been run in 2 years.  So he took Cheryl for a little “spin” this morning.

Today Cheryl and I packed up the bikes and took them to Jekyll Island.  That is one of the Golden Isles of Georgia.  And it is a state park.  So you have to pay a $6 “parking fee” to enter the island.  We rode around part of the island on their excellent bike paths.  It was really cool to ride on a path inland from the sand dunes and be able to see the ocean and feel the ocean breeze as you ride along.

Then we took the trolly tour of the island.  It was developed in the late 1800’s as a hunting club for wealthy people from the north to spend January, February and March.  There is a big hotel (that has it’s own tour) and several “cottages” that are huge houses.  The houses didn’t have kitchens because everyone was encouraged to have their meals in the hotel as part of the club.

There are a few hotels and condos on the ocean side of the island.  So it would be an awesome place for a family gathering.  There are some shops and restaurants, but most of the island is park land.  St Simon’s island is another one of the Golden Isles, but it is a community and is also more touristy.

After the tour, we sat outside at the Raw Bar and had seafood nachos and a beer.  We headed back to the marina in time to shower and attend the Halloween party.

While we were gone, Dave worked on moving the gyroscope for the autopilot.  His new cord arrived this week.  Finding a place to mount the gyroscope that wouldn’t be affected by other magnetic pulls wasn’t easy.  You also have the diesel engine and wiring to work around.  He ended up putting it under the aluminum propane tanks, since they aren’t magnetic.  Again, just figuring out where to mount it took time.  Then moving things so he could mount it, then putting things away all took time.  Every job takes 3 times as long as you think it will.

About half of the boaters came to the party in costume.  We kept it simple.  Dave put honey and oatmeal on his face.  Then he would act like he was picking a scab and eat them.  I wore black and wore an orange Halloween streamer.  Cheryl wore a green t-shirt that had a design of an elephant on it.  She was the “elephant it the room”.  Needless to say, we didn’t win any costume contests.  Sherry, the dock master, had people play a few games.  Then we ended up playing triominos with friends. 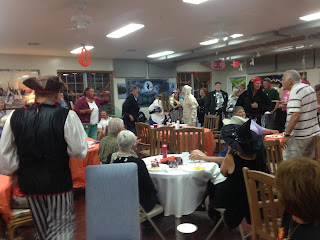 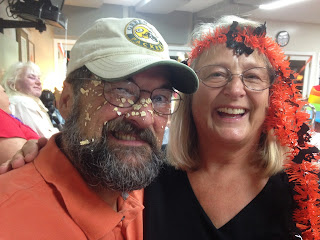 Posted by svluckofafool at 4:46 PM