We had the rental car for one more day.  So we ran errands all day.  First we went to our storage unit.  We think it will be real handy having it here.  We took more things there that we won’t need over the winter, but can get next summer, if need be.

Then I dropped Dave off at Home Depot while I ran to Walmart.  We had a late lunch and headed back to the marina.

Dave wanted to start restitching our bimini and dodger.  So I took off shopping a little longer and returned the car.  This evening, 6 boaters decided to go to see “Bridge of Spies” at the theater starring Tom Hanks.  It was an excellent movie.  And going to the theater is a treat when you don’t have a car.  My supper was popcorn!

After we returned, Vicki, Rhonda and I played triominos.  Vicki is the one that introduced us to the game and she was leaving in the morning.  They sold their boat and the new owners were taking possession on Wednesday.

We shared a couple shots of Rumchata and Horchata between rounds.  It is strange saying goodbye to friends that we have spent the summer with.  But in the cruising world, it’s possible to cross paths again. 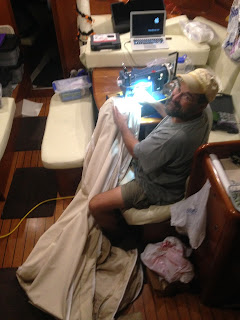 Posted by svluckofafool at 5:10 PM