Dave had his VA annual check up today in St Augustine.  We left late morning for his 2:00 appointment.  Dave dropped us off downtown so we could be tourists for the day.  We walked around the fort, looked at the beautiful Bridge of Lions, and walked through the old streets and tourist trap area.  Then we went to the Flagler College for their 1:00 tour.  The Ponce de Leon hotel was built in the late 1800’s for wealthy Americans to spend the winter in Florida.  Now it is the property of Flagler College.  The dining hall was once the hotel’s restaurant/ball room.  It had the largest collection of Tiffany glass in the world.  Cheryl works with stained glass as a hobby, so she was particularly interested in this. 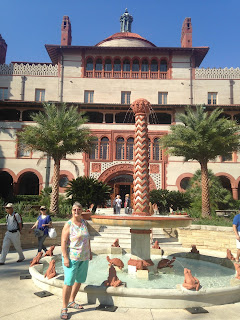 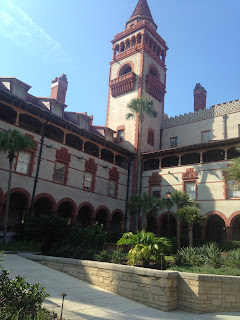 Then we walked to a local distillery for a tour and tasting.  Dave had finished his appointment, so he joined us.  This distillery uses all local ingredients from Florida farms.  And what they don’t use goes back to them to feed their animals.  They are distilling rum, vodka, gin and bourbon.   But their first bourbon won’t be ready until later next year since it has to age in the barrels.  The St Augustine Distillery Company is housed in an old ice house.  They had an interesting display about how ice was harvested, and when it was first made.  In the earlier part of the 1900’s (maybe 40’s), research was done to find a way to cool off tuberculosis patients.  And this lead to making ice.  Once drinks were made with ice, no one wanted to go back to warm drinks.  Learn something new every day. 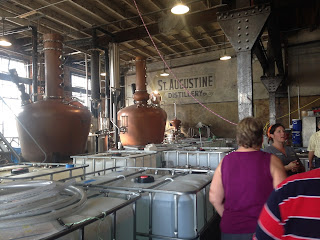 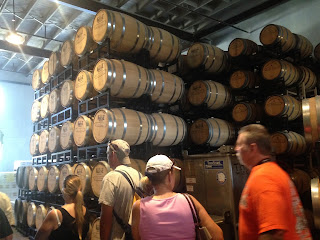 At the end of the tour, they had a tasting room.  They gave us a sample of their "Florida Mule".  A Moscow Mule is made with Russian Vodka.  They had their own mix, which you could buy here, also.  And we had a taste of Gin and Tonic.  They don't use tonic water.  They have a tonic syrup, which they sell, and they add soda water.  Then you could have a "neat" of vodka, gin and rum, which we did.  That's just a small taste, not a full shot. 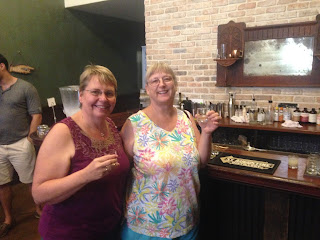 They had a restaurant in the building, too.  It had good reviews online, so we decided to stay here to eat.  Plus there was free parking.  Parking in the old section of St Augustine is expensive, IF you can find a parking spot.

We had a couple unique mixed drinks using their liquors.  We shared a couple appetizers-crab beignets and a bacon wrapped dates called “devils on horseback”.   Dave ordered their carrot ginger soup, which we had to taste-yummy.  Cheryl had their catch of the day-flounder.  I had  a stew with fish, shrimp, boudin sausage in a tomato base.  Dave had steak tartar and truffle french fries.  Then we shared a pistachio creme brule for dessert.  Everything was delicious!    But if was an uncomfortable 2 hour ride back to Brunswick being so full.  And Cheryl and I were beginning to have hang overs by now.  Cheryl wanted to treat us to dinner for providing her with a room and the transportation while she was visiting.  Thanks Cheryl!


Posted by svluckofafool at 4:24 PM