Friday, June 26
We packed up to leave for Florida, but there is always someone on the dock to talk to.  I finally had to take Dave by the hand and walk him to the car.

We drove to Stuart, Florida to Mack Sails, about a 5-6 hour drive south on the east coast of Florida.  We thought we would just drop off our sails, the main, genoa (jenny) and the spinnaker (bag of wind as Dave calls it).  But someone took the time to pull them out and take a quick look at them.

They have a 3 hour minimum charge for repairs.  So they go over all the stitching as needed, replace the tell tales (ribbons that show you how the wind is flowing over the sails).  And they will replace the protection cover on the main sail-the part that is exposed to the sun all the time.  He tested a spot and it ripped easily.  We decided that only the jenny needed washing and add SailKote, a teflon spray to protect it.  That sail has to be sent to Vermont and back to us for that part.  Crazy.  He suggested we get our own SailKote to cover the other two sails.  We are also having them move the spreader patches down on the leach of the jenny.  For non sailors, that means they will move an area of extra protective material on the edge of the sail that will protect the sail if it rubs against the rigging that supports the mast.

After leaving there, we drown west to Cape Coral.  We had to go around the west and south ends of Lake Okeechobee.  That is a huge lake!!  After about 3 hours, we made it to Killion’s in time for dinner and gin and tonics made with limes from their lime tree.  Good to see them again.

Saturday, June 27
After a lazy morning and breakfast, we split up for our day.  Jackie and I hit Walmart and an outlet store.  Just needed a few things for the boat.  Dave and Brian hit the hardware store and went to our storage unit.

We all met back at the house and enjoyed their pool.  For dinner, we went out for BBQ at a little place that is rated 4th in “some region”.  We had to wait 45 minutes.  It was good, but not spectacular.  And they were out of brisket by the time we ate.  But it was still a good dinner.

Sunday, June 28
I went to church with the Killions this morning.  After lunch, Jackie and I went back to Walmart to get some fun float toys they had for their pool that we think we’d like in the Bahamas.  One was a net that attaches to a “noodle”.  And one was a circle that had a mesh in the center.  That way you are sitting in the water, not on top of an air mattress.  And they stored in a small bag.

The Killions are going to SD for about 6 weeks leaving Wednesday.  So Dave and Brian put up a few hurricane shutters on the windows.  They also met with the guy that will be taking care of their lawn, pool and checking on the cat.  We will overlap our stays in SD by one weekend.

Spent the rest of the afternoon in the pool.  Grilled steaks and chicken for dinner.  Then watched a movie together.  Just a relaxing weekend with friends.

Monday, June 29
We left Killions before 8:00 to go see the accountant in Ft Myers that did our taxes for us.  We picked up our tax return and discussed how we should be handling a few things now that we aren’t making any money :(

Then we headed for the 7-8 hour drive home.  We decided to take a route through Orlando.  It wouldn’t have been too bad, but a heavy rain storm hit just as we were entering the city.  Traffic didn’t stop, but it moved slower that we had hoped for.

Once we reached St Augustine, we went inland about 30 miles to Green Cove Springs.  That is where our mail is processed.  We were able to pick up 3 months worth of mail and a few packages.  Then we head north from there, take the loop around Jacksonville, FL and head back north to Brunswick.  Routine run, now.

When we were back in Brunswick, we decided to check out a BBQ restaurant here called the Copper Pig.  Outside, they had a pond where people could buy food to fee alligators with a fishing pole.  We thought it was fun to watch.  And the BBQ was good with lots of leftovers.  Yum, yum. 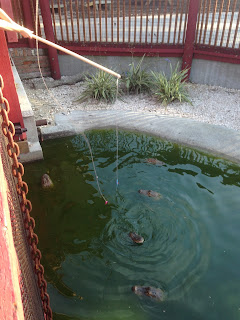 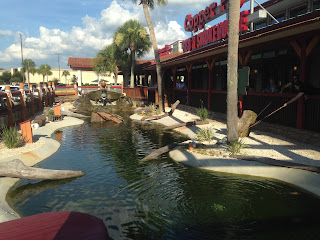 Posted by svluckofafool at 9:14 AM