Saturday
We made bread again today.  And it keeps improving each time.  Or we just like home made bread, no matter what it tastes like.
We succeeded at hanging out at the boat yard another day  just doing little odd jobs and using the free wifi.

Sunday
We had Rinssor pick me up for church and Dave went along to use a good wifi connection  in town.  So he dropped me off first.  Then he took Dave to the building where I had my massage.  Tricia, my massage therapist, said we could return and use here wifi connection, or the one for the realtor downstairs.  They both have good connections and no one would be using it on the weekend.  She had given us both of their passwords.

So after church, I had Rinssor pick me up and take me to Dave.  Before leaving church, I visited with some volunteers that were here for a week from Vero Beach, FL.  They were here to do some maintenance work on a school called ECC-Every Child Counts.  I told them I would announce that they were here and could use help over the VHF radio on the cruiser’s net in the morning.  And since we visited with the priest last week after mass in Hope Town, he remembered me and said hello.  Just when I am feeling like this is my community, we are going to leave.  But there’s always next year.

Dave was able to down load new software for the chart plotter.  Then he updated the charts on an sd card to take back to the chart plotter.  And he updated apps on our computer, iPad and phones.  He did this on a second story balcony overlooking the bay with a nice breeze.  It took about 2 1/2 hours.  It was really nice to have a good, fast connection to get all of that done.  He has used poor connections for the chart plotter in the past and it would leave out whole sections of the map.  Found that out the hard way back in the states on the ICW.  We do have other backups.

Then we walked about a block to a second story restaurant that also overlooked the bay.  We enjoyed a great lunch.  Dave had their roast lamb special.  And I had their Jamaican Paella made with mussels, chicken and sausage.

We had Rinssor pick us up to go back to the boatyard.  It was really hot there.  So I walked down to a little beach area and went for a swim.  Another couple is here, Dan and Marcia.  Marcia joined me for awhile.   We just sat in the water and chatted.  Then after showering, we joined the guys at their boat.  The boatyard had a shower outside that we would use wearing our swimsuits.  Keeps the humidity down in the boat.

Dan, Dave, and Peter, the security man were visiting in the shade.  Peter let us climb up onto a catamaran and check it out.  I forgot how spacious they are.  We have chartered them in the British Virgin Islands.

Then Peter got a phone call from his wife asking him to bring home a few sapodillas.  So we found out there was a sapodilla tree on the property.  So we all walked over there.  Peter found a long PVC pipe and started whacking at them piñata style.  We ended up with 6 of them.  Dan has been coming to the Bahamas about 20 years and had never seen them.  We first had them in Georgetown.  There was one that was ripe enough to eat, so they had a chance to try it right away.  The others will have to ripen for awhile.  It is similar to a kiwi, a little larger, and much sweeter.
We sat telling stories for quite awhile.  Marcia even made me a Bloody Mary.  Come to find out, they have been married and divorced twice and are giving it another try.  And Dan has been married 7 times.  He has a captain’s license and they used to captain and chef on 100 foot yachts.  Made lots of money, but put in lots of hours.  I think we finally met someone with more stories than Dave. 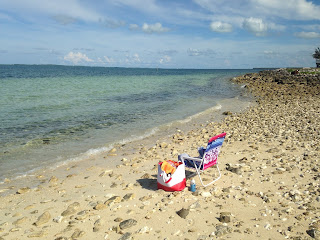 This reminded me of a Zac Brown song:
Knee deep in the water somewhere
Got the blue sky breeze blowing wind through my hair
Only worry in the world is the tide gonna reach my chair
Sunrise there's a fire in the sky
Never been so happy
Never felt so high
And I think I might have found me my own kind of paradise
Posted by svluckofafool at 8:44 AM