Another slow uneventful evening.  About 5:00 am a freighter passed behind us within 2 miles.  I could hear his engines since we didn’t have our engine running.  That seemed close even though it was 2 miles away.  Afterwards, Dave told me I should have contacted the boat to be sure they were staying on that course.  If they had turned towards us, we wouldn’t have had time to get out of their way.  So you learn something new everyday. 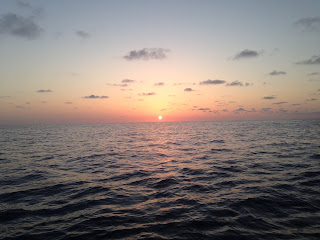 Dave woke up at 6:00.  After we had breakfast, he made the decision to run our engine since there was even less wind predicted for today.  At 6:30 am, he started the engine and ran it at 1000 rpm (we usually use close to 2000rpm).
About every two hours we would stop the engine, let it cool, and Dave would check the oil level.  The engine holds 5 quarts of oil.  When it would get high, with the mix of diesel and oil, he would drain off 2 quarts of the diesel/oil mix and add 2 quarts of new oil to thicken it again.  He did this several times and added 2.5 gallons of oil total.  So he removed about 3 gallons of the mix.  If he didn’t do that, the mix would feed back into the engine and cause it to run full speed again causing the run away engine.

About 7:00 pm, we spotted pilot whales.  They are a large species of dolphins.  They were playing in the water like dolphins, but we could tell they were larger.  Pretty soon they came up to our boat.  Since we had the engine off, we could hear them spouting near our bow.  So we both went up there and were able to get a couple good pictures of them.  Their noses are more square and they are about 20 feet long.  We felt fortunate to get to experience that. 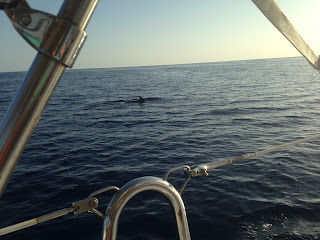 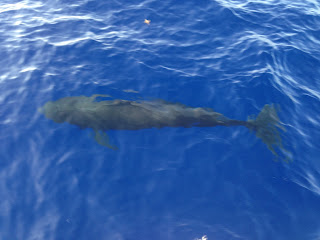 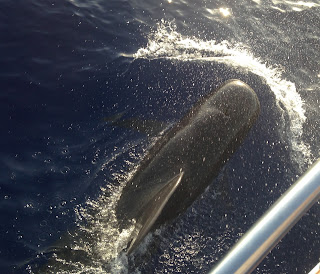 We had meatloaf and a couscous and vegetable salad for dinner.  Then I went to bed early again.  That schedule has been working out.  This time I slept until 2:00 am Tuesday.  Dave would set his phone alarm for 15 minutes and lay down in the cockpit.  But he was glad to go to bed and slept until 7:00 am.  We had 15 knot winds and were traveling between 7 and 9 mph all night with clear skies and  beautiful stars.
Posted by svluckofafool at 2:08 PM