This morning we left the anchorage about 9:30.  I was able to answer a few e-mails before leaving.  Not sure we’ll have internet access for a couple days.  As we were leaving the anchorage and heading towards Adderly Cut inlet, we heard something on the radio about WWII airplanes.  We thought that two boats were talking to each other.  But within about 10 minutes, we saw 3 WWII airplanes pass by our boat.  I turned to see if the noise was from another boat and saw them behind us.  That’s something you don’t see everyday.

We knew it was going to be a light wind day and from the north.  Since we were heading NNW it was almost on our nose.  WE used the jenny and the main to assist and back off the engine, but we never shut the engine off or we’d still be out there.

It was a very calm day at sea, so I was able to go below and prepare potato salad for dinner.  Dave was able to put out his fishing lines.  And while I was below, he yelled to me that he had caught a fish.  So I hurried outside to help him.  He had about 150 ft of line, so I had time to ask him what else he would need.  We both realized we really weren’t prepared to bring in a fish.  I got out the gaff hook to be able to hook it and bring it in.  But then what?  As he brought it to the boat, he figured it was a barracuda, which he would release anyway.  But as he lifted it out of the water, 1/2 of him had been recently removed, and he still had some fight in him.  Dave was able to shake it off of the hook to let it go (to it’s death).  So it seems that a bigger fish took a bite out of him once Dave had it on the hook.  We were kind of thankful that we didn't also catch whatever was trying to eat him.  So after all that excitement, Dave ran a second line off the other side of the boat.  But he didn’t get another bite the rest of the day.

The reason we won’t keep barracuda is because we could get ciguatera.  It is an illness you can get from eating reef fish.  Especially fish that eat other reef fish, like barracuda, because the poison level intensifies.   And there is no test you can do to see if it is carrying it.  It causes fever, etc, but also affects your central nervous system.  I couldn’t find details easily, but will add them if I do.  So in the meantime, we are avoiding larger fish, especially if they typically live near a reef.

About 6:00, we headed in towards Conch Cut.  The guide books tell you about rocks to watch for, and it is reassuring to see them where you expect them, but also something you have to stay on top of as you enter or exit an inlet.  We decided to turn south around Compass Cay and head towards a marina, but anchor outside of the channel.  The channel to the marina had markers because you have rocks on one side and sand on the other, sound familiar?  There is a rocky corner we had to round to follow the channel.  We were glad we didn’t meet a boat as we rounded that corner.  Then there was a beautiful bay to the west of the channel that we anchored in.  We had a beautiful view of the sunset from our boat. 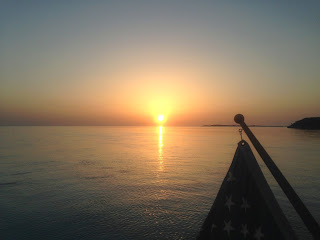 Posted by svluckofafool at 1:52 PM