May 3, 2015
I was really looking forward to going to church in Georgetown.  But it ended up being too rainy and stormy to take the dinghy to shore for church.  My mother would have made it happen.  She probably would have left an hour early to beat the rain.  And she would have stayed in the church praying until it stopped.

We decided to make mango pancakes using canned mango.  I didn’t realize that Dave didn’t care for mango when I bought two cans of it.  But we were impressed with canned mango.  They tasted a lot like peaches, only a little softer.  I guess we have never had a ripe one living in the midwest.  We have several cans of fruit, so I am going  to quit buying expensive fresh fruit and start to eat up our stores.
Dave fixed a leak on the diesel engine.  It was leaking antifreeze around the radiator cap.  He put a better clamp on the hose and will watch it to see if that takes care of it.
We ran the generator again and the water maker.  So far, so good.
I spent time updating my blog.  It took awhile to get Dave’s story straight about climbing the mast and working on the furler.
Dave had been wanting chili.  So we started last night with soaking beans.  Today we heated them and put them in a thermos to cook longer with no fuel.  Works good if you have a good thermos.  Then Dave put together the finishing touches.  It was great.
We spent the late afternoon, early evening cleaning the bilge.  We never did wash it out to get rid of the salt water.  We have been storing some items in flat buckets in the bilge.  So it was nice to get those buckets off of the port settee and back into the bilge.   We only store things that are self contained and could get wet on the outside with out being ruined, like extra mayo, mustard, wine, juice in cans.  And all of those things go into ziplock bags before going into the buckets. 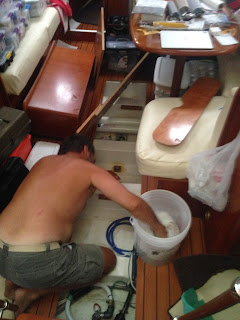 I have been putting off cleaning our fans for about a month.  We have 5 that are suspended from the ceiling.  Dave offered to take them apart and put them back together if I cleaned them.  That was really slick.  We may clean them before the chunks of dust go flying if we do it that way again.

May 4, 2015
We were up early again this morning to hear Chris Parker’s weather report.  It sounded like this tropical storm wasn’t going to be too bad in our area, and was moving NE.  In Georgetown, it would be more like a cold front.  We did find out that we’ll have more rain today than tomorrow.  So we planned to just hang out most of the day.
We also listened to the cruiser’s net at 8:00.  Someone was looking for foul weather gear for their crew for crossing the Atlantic Ocean.  Someone else, with a foreign accent, said they had 2 sets of “water proofs”.  But give them about an hour to find them.  They are somewhere on the boat, they just weren’t sure where.  We got a chuckle out of that because you stow things everywhere.
Dave checked his fix for the leaking antifreeze.  It is still leaking.  So Dave will look at that another day.  He is forming a plan and rounding up what he needs.
Our biggest accomplishment today was making bread.  We used a recipe from another sailor.  The hardest part was finding the right temperature of water to be sure our yeast was active (100-110).  I had an open jar of yeast in the refrigerator that I thought may be getting old, and it was.  So I had bought packets of yeast before leaving Florida.  They worked great.  While the bread was rising and baking, we watched two movies.  We haven’t watched one movie in a long time, let alone two.  It rained off and on all day, so we were just plain lazy.
We ate the wonderful hot bread with the rest of the chicken soup.  I think we’ll be making bread more often, now that we finally tried it and were successful. 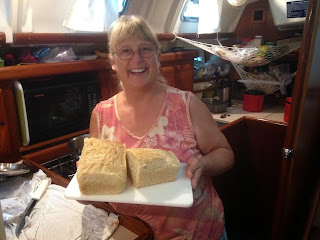 Posted by svluckofafool at 10:04 AM