Thunderstorms were predicted for the afternoon, so we moved the boat this morning to Fowl Cay to snorkel in the Land and Sea park.  We anchored on the west side of the island, then took the dinghy to the east side to the coral reefs.  There were mooring balls to tie to over the dive spots.  The first place we stopped had two large coral “islands under ground”.  We snorkeled around each of them seeing schools of fish and all types of coral.

We got back in the dinghy and moved to a mooring ball further out in the ocean.  We had to cross the reef in a shallow area to get to the mooring ball.  Once there, Pete got into the water first.  He said there was a barracuda beside the boat.  I got in and swam around the dinghy to see it.  It was about 4 feet long and swimming with a school of fish.  Pete seemed to be backing away from it quickly, so I met him on the other side again.  Then Dave got in and could see it, too.  We all started swimming towards the reef, and the barracuda seemed to be hanging with us.  I thought it was after the school of fish.  Pete and I took off for the reef.  After a little while, I looked around for Dave and didn’t see him.  I looked back and  he was in the boat.  He yelled “that damn barracuda wouldn’t leave me alone.”  Later, back at the dinghy, he told us how it kept swimming up along side him, would disappear and reappear again.  He would come right at his face as Dave swam backwards, not fast, but sticking with him.  So Dave would swim perpendicular to him and he would still come after him.  Dave even kicked it with his fins and it stuck with him.  So he decided to get out of the water.  We later read somewhere that they are protective of the school of fish they are swimming with and could even attack you if it thinks you are a threat to their food source.

At the reef, we saw multiple types of fish.  We saw a large grouper about 5 feet long.  This reef was more 3 dimensional with the growth rising and lowering, so it was interesting to explore.  We considered exploring further with the current and having Dave pick us up, but there was a thunderstorm developing in the west.  So we decided to call it a day.  Back at the dinghy, Pete was going to let me get in first with the ladder.  Then he would get in just over the side.  I had one foot in the rope ladder and was reaching for Dave to help pull me in when Pete yelled “SHARK”.  We were both in the boat immediately.  He said it was about as long as our 10 foot dinghy and heading towards us.  I didn’t see it, but that was OK.

We had put the Lehr outboard motor on the dinghy because we were still having trouble with our Mercury.  The Lehr has 2.5 horse power and the Mercury has 15 hp.  So it seemed to take forever to get back to the boat with a storm heading our way.

Later, we headed across the Sea of Abaco to Red Bay on Great Abaco Island, about 10 miles north of Marsh Harbor.  By the time we arrived, the rain had started.  We could see by our AIS that there was another boat in the bay, but it was hard to see very far in front of the boat.  So we just crept in slowly until we could see 3 other boats.  We should have had our radar on to see all of them.  By the time we anchored, the rain had stopped and there was a great double rainbow with a really high arch to it.  That was unusual. 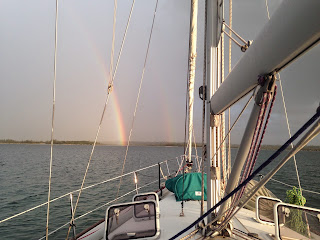