This morning I caught the end of the “cruiser’s net” on the radio.  After the regular announcements, the new arrivals stayed on to hear more info about the area.  We were given info about going into Georgetown by dinghy, trash disposal, where to get fuel, the gathering spot of cruisers at 2:00 each day, etc.  We were told of a web site, www.bahamacruisersguide.com.  I checked it out after the net and wish I had seen this 2 months ago.  There is a wealth of information on this site and it covers all of the Bahamas. Just wish we had unlimited wifi.

Dave checked outside this morning and found the second towel and all but one clip for hanging the clothes after last night’s squall.  They cost about $1 apiece and we just had Erin and Joe bring us some from West Marine.  They are plastic so won’t rust and are made to go over our life lines.  So we prefer to keep them.

I started a bucket of towels before breakfast.  Nice to let them soak for a while.  After breakfast, I finished laundry.  It’s a windy day, so should dry fast.  I guess we are in for some windy weather with occasional squalls over the next few weeks.  So it is nice to be settled in one place for awhile.

Dave spent some time working on the generator again.  He discovered the leak was coming from the raw water pump.  So he worked pretty hard at getting it out.  After taking it apart, he realized he needed new seals.  So we will go on a hunt for parts tomorrow in Georgetown. 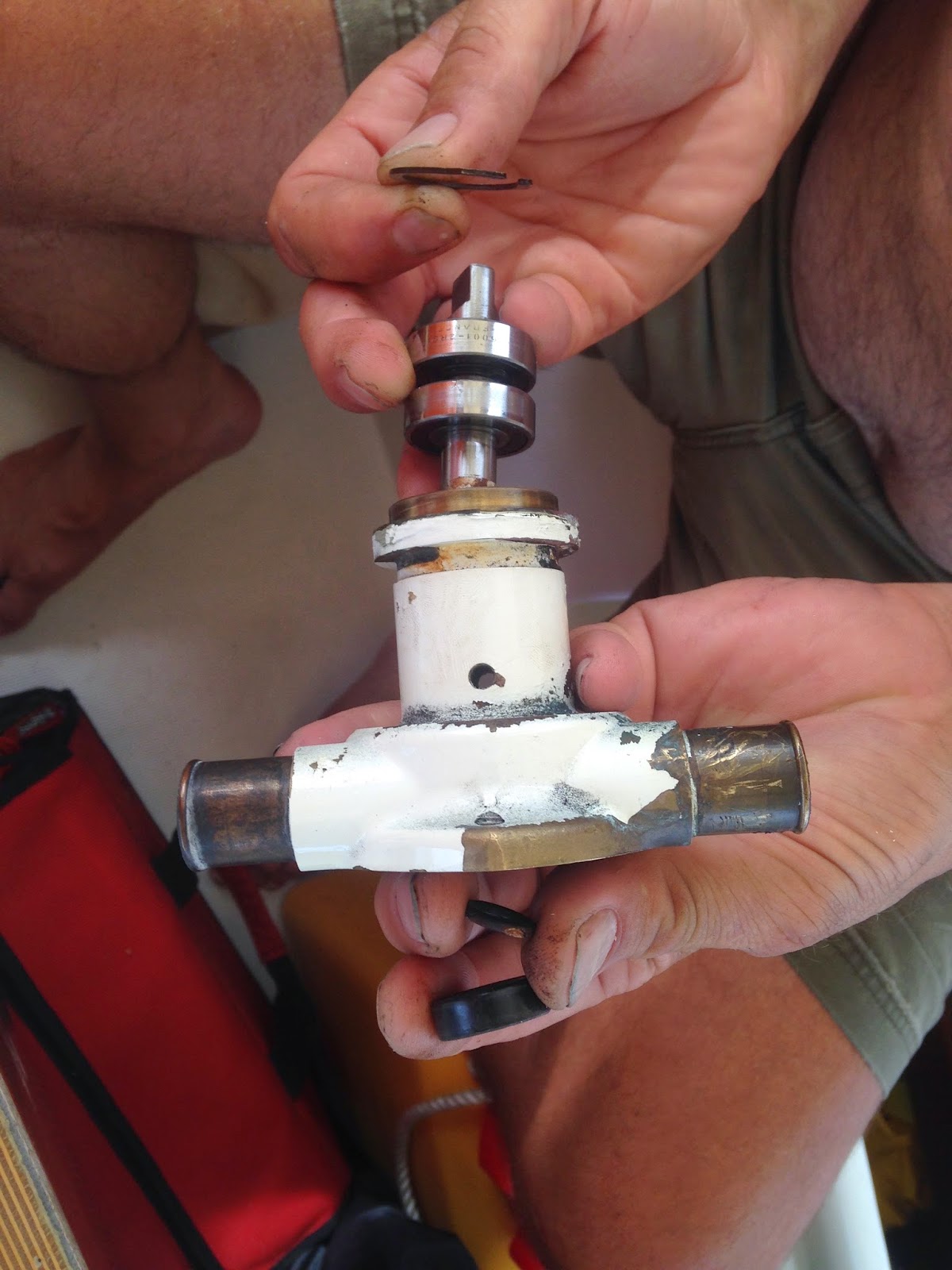 Starting in the late afternoon, we could see a storm brewing north of us.  It reminded me of watching an approaching  storm on the prairie of South Dakota.  Everyone was outside on their boats checking their anchors and bringing in anything that might blow away.  That included our laundry.

We took quick showers outside before dark.  They had to be quick for two reasons, we can’t use our water maker without the generator.  And the bugs seem to come out at dusk.  Dave actually offered to play cards with me after dinner.  We played one game of cribbage and we could hear the storm moving closer.  About 7:00, it started to lightning and thunder.  And you could hear the crackling as it moved across the water. You could also see lightning bolts go straight to the ground.  This is the first big storm we have been in since we were hit by lightning last year.  It’s a little nerve wracking, but there is nothing you can do.

The wind really came up about 7:45 and we were rocking and rolling.  Dave stood on the steps with his head poked out checking that our anchor was holding, but also watching other boats.  One boat didn’t have an anchor light on and it’s jenny sail had unfurled and was flapping in the wind.  If that keeps up too long, it can shred the sail.  We assumed no one was on the boat.  Then Dave saw a dinghy trying to get back to their boat.  It was raining pretty hard, so they must have been soaked.  The worst of the storm was over in about 15-20 minutes.  We thought it was windier than the night before, so it could have been gusts up to 50 knots.  Not something you want to see very often or for very long.  We were able to open up the boat again and enjoy the cool breeze.  It started to sprinkle again just after we got into bed.  So we had to close the windows again.  We have a great “scoop” that fits over the hatch in our v-berth.  We can pull it down to stop the rain from coming in, but it is still open to let the breeze in.  We didn’t even have to run the fans:)
Posted by svluckofafool at 12:11 PM