This morning I was up in time to listen to the whole cruiser’s net.  They read the weather report that Chris Parker does by e-mail, if you are a subscriber.  Which I think is a little strange, because we pay for that service.  But we can also contact him for specific information, too.  When they came to the part about anyone needing assistance, I asked where to find parts for a raw water pump.  We were given a few options and will check that out today.

So after breakfast, we headed into Georgetown.  We are anchored off Stocking Island, which is across the bay from Great Exuma Island.  And we are out towards the west end of that island.  So we had a long dinghy ride to get to town.  We had read in a couple places that you are supposed to check in with the harbor master when you arrive and leave.  We tried to contact him by radio, but didn’t get a response.  So we thought we’d stop in  there.

There is a little lake inside Georgetown called Lake Victoria where there is a dinghy dock.  To get into the lake, there is a narrow channel under a stone bridge.  Traffic is single file and the incoming boats have the right of way.  The water gets a little rough with current and wind, but it works well. 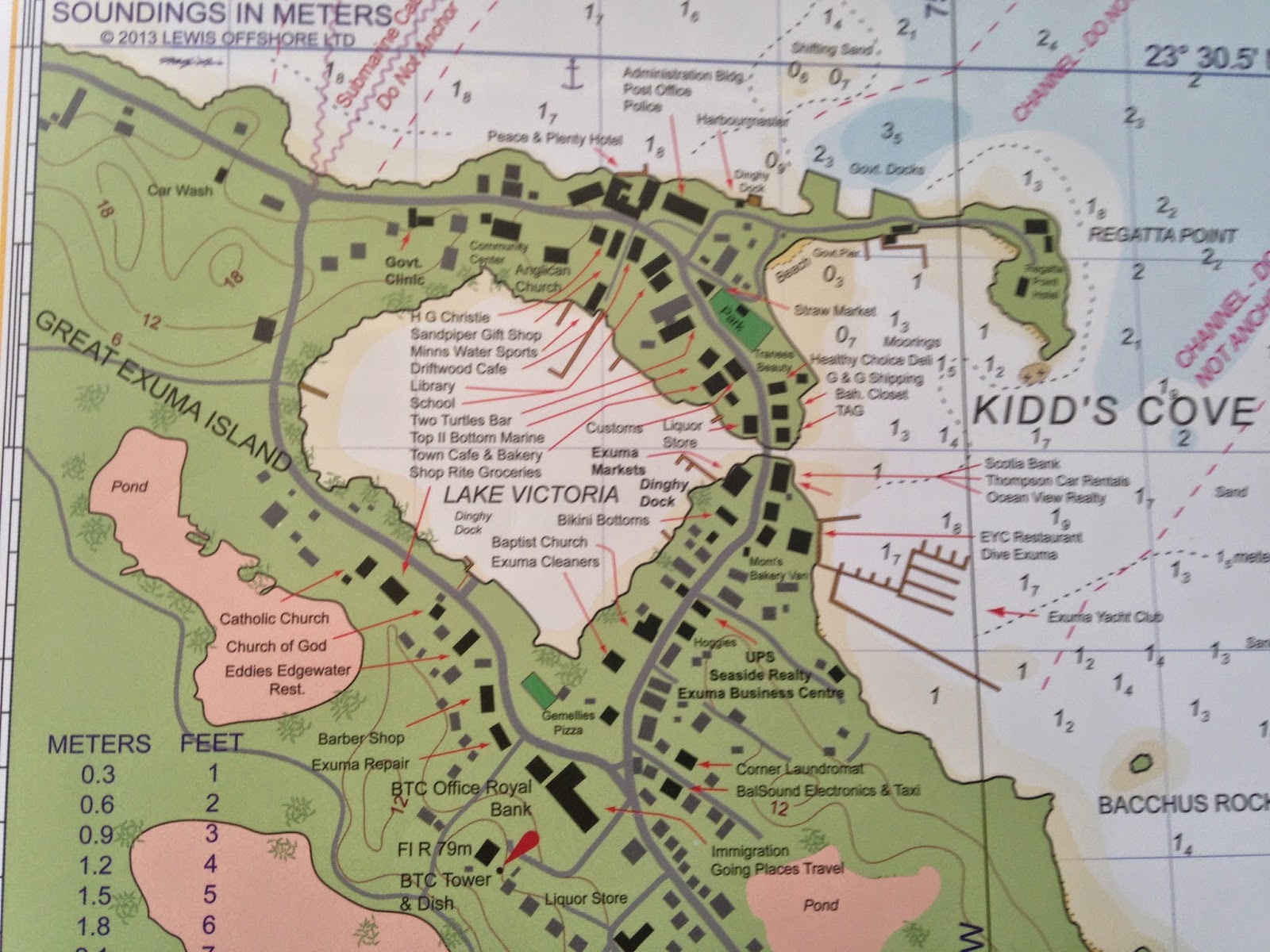 Exuma Markets is a  grocery store that provided the free dinghy dock.  They also have free water where you can fill cans.  We may have to do that if we don’t get the generator working.  On the street, we headed towards the harbor master’s office.  On the way, we found one of the parts stores, Top II Botton.  They were more of a household hardware store and didn’t have what we needed.  But we met a really nice lady, Jillian, who has lived here for years.  She had a British accent.  She gave us all kinds of information about parts stores.  She asked where we were headed next and we told her we were going to check in with the harbor master.  She said no one does that.  And if they ask, tell them Jillian said so.  She said her boyfriend was playing music at the Peace and Plenty resort that night, Bahamian Rake and Scrape, and we should come.  We asked her about the Napa store that is now AID.  She gave us directions for north of town and said we should hitch hike there.  I asked if it would be easier to be picked up if it were only one of us instead of two.  She said “can you jump into the back of a pickup?  Then you’ll be fine.”

So we headed north to the fork in the road before we started hitch hiking.  We passed the Peace and Plenty hotel/restaurant and I decided to wait for Dave there.  It was about 11:00 and we could have lunch when he returned.  There was a nice lobby area with cushioned wicker furniture and a nice breeze, so I just waited there.  No one seemed to mind.

We figured it would be about 2 hours.  Dave was going to try to walk to the store about a mile and a half.  After about one hour, I started thinking about the possibility of him disappearing.  “Just hitch hike, they said.”  And I would never see him again.  I knew that was foolish, but your mind does wonder.  About 1:00, he came in, pretty sweaty.  So we sat outside on their patio for lunch.

The AID store had a bin with mixed Jabsco parts that he had to search through because they are no longer carrying their parts.  Some things were boxed, but others were just loose and you had to match what you needed.  He found one cup seal, but needs two.  So he bought that for $5.  He did hitch hike back and rode in the back of a pick up.  But he was dropped off several blocks from where I was and still had to walk a ways.

The next place was Brown’s Marine south of town about 3 miles.  We thought we could get there by dinghy.  But it was very confusing with islands, so we went back to shore.  We found a taxi to take us to Brown’s Marine.  He even waited for us.  They didn’t have the part, but will see if they can order it.  The lady there, Allie, thought it should be here by Wed or Thurs at the latest.  So she is going to e-mail us what she finds and with prices and an estimate of time.  Still strange that we can’t just call each other.  That ride ended up being $30 and we tipped him $5 for waiting.  We may figure out the way by dinghy if we go back next week.

So back to the boat.  We checked out the anchorages close to town and decided to move our boat closer.  It is a long rough ride back to where we are anchored.  I just felt beat up by the time we got back.  We were bouncing on the waves the whole way.  And you have to lean over to hold on to the side handles.  Do I sound like I am getting old?

Now Dave went back to work on the water pump.  He replaced one seal, but really needed a second one.  He put everything back together and it ran with only a small leak.  So we decided to make water and check it out tomorrow.

Quick showers again.  You have to cool down to be able to go to bed.  Otherwise you are too sweaty.  Then we played a few hands of gin rummy.

We had about 3 squalls move through with rain, but none of them were as strong as last night.
But it does sound like we may be on the edge of a tropical storm next Tuesday.  So stay tuned.

Posted by svluckofafool at 12:20 PM