Today we moved the boat back over to the site of the wreck.  From what Cheryl had scoped out yesterday, we were able to get the boat closer to the wreck.  So into the water Cheryl and I went.  Today we saw schools of fish.  I saw one queen angle fish that was smaller than average but the blue on it had a fluorescent glow.  The majority of the framework of the boat still laid on the floor of the ocean in about 25 feet of water.  So it was amazing to see the boat and the fish.  This was Cheryl’s 400th dive and she loved it.

We decided to go back to the anchorage we had for the last two days.  It was such a peaceful spot.  And we knew the anchor would hold good.  Cheryl and I decided to snorkel to the lovely beach on Egg Island.  It was further than we thought, but lots to see.  Lots of coral formations and several kinds of fish.  We noticed our anchor wasn’t in sand, only caught on coral.  So when we were back at the boat, we moved it even closer to shore. 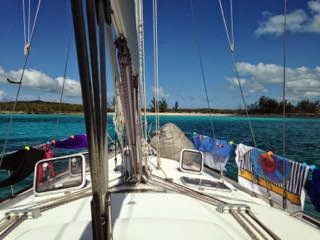 Cheryl and I sat outside playing cribbage for about an hour before we started dinner.  The large power boat was the only other boat in the anchorage.  While we were outside, we saw two sailboats sailing into our little bay.  The closer they got, I realized they were the two boats we have seen in other harbors that have been rude with loud music at night and one had a barking dog.  But we had never seen them together until now.  Of course Dave thought we were just teasing him by telling him it was BOTH of those boats.  But he believed us when he heard the barking dog.  There went our peaceful little piece of paradise.

We went inside to start dinner about 6:00pm.  We made an awesome coconut curry shrimp dish over rice.  We had bought a new curry called vadouvan which was an excellent mix of spices.  While we were eating inside, we heard what we thought was a chain saw.  Sure enough, the people on those two boats were cutting trees to make a bonfire on this deserted island.  Of course, since we moved closer to the shore, the smoke came right towards our boat.  Dave ended up with one of his sinus headaches because of the smoke.  I asked Dave, when did we become “fuddy duddies”?  30 years ago, we would have been joining them on the beach.  Now we are cursing them and wondering who to call on the radio if the bonfire gets out of control. . 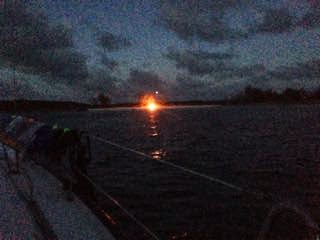 When we went to bed, I gave Dave permission to air horn the other two boats if they got too loud after we went to bed.  He replied with an enthusiastic “Can I?”.  They ended up being just fine other than the dog barking when they returned to their boat.