Easter Sunday!!
I woke up this morning in time to catch the sunrise.  Then I started singing “Jesus Christ is risen today”.  What a wonderful day!  It was also the day my good friend, Cheryl, was arriving to spend a week with us.

I took the taxi to church this morning.  It was a beautiful service.  Besides lots of extra singing, which I love, there was a group of 6 girls around 10 years old that did an interpretive dance.  They were so precious and let me take their picture after mass.

I arranged with my taxi driver to  pick up Cheryl at the airport.  Her plane was scheduled to arrive at 12:00 noon.  About 11:00, she sent me an e-mail saying that the plane left 30 minutes late.  Not having phones, I sent Rinssor, the taxi driver, an e-mail to say she would be late.  He wanted to know her flight number and estimated time of arrival.  All I had was the airline and that she was late.  So he checked with the airline and e-mailed back that she wouldn’t arrive until 2:00.  So we settled into doing a few things on the boat and waiting.

We just happen to check our e-mail about 1:30 and we had just received one from Cheryl saying she was at Snappa’s, a restaurant at the the closest marina, enjoying a beer.  So I quick sent another e-mail to Rinssor telling him about Cheryl, not knowing whether he gave her a ride there or not, but thank you and sorry for the confusion.  Then I took off in the dinghy for the marina, which you can see from our boat.

So the 2:00 flight was the next flight into Marsh Harbor.  Her flight was only 30 minutes late.  She was expecting a taxi driver with a sign for her.  When another taxi driver asked her is she was looking for someone, she tried to remember the name Rinssor, but would have had to look back in her e-mails for the full name.  They said “oh sure, we know him” and called him.  Well they called Winslow, not Rinssor.  But he took to the public dock where I was to meet her with the original taxi driver, but there is nothing there, especially me to pick her up.  So he took her to the nearest restaurant.  She knew we didn’t have a phone.  But she figured they would have a radio and they tried calling us, but we didn’t have our radio on.  Then she realized they had wifi, so she sent us the e-mail and not to worry, the beer was cold.

So when I arrived, we sat and had a beer together and exchanged stories.  She loves an adventure.  Since the restaurant had free wifi, we decided to take a picture and post it on Facebook.  Just then some people that were on the plane with Cheryl came out of the restaurant.  So they took it for us.  They were joining friends that owned their own boat, too. 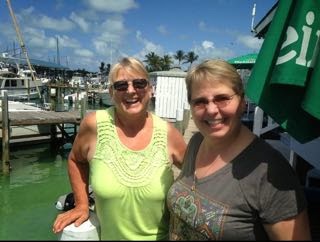 Then we put her light luggage in the dinghy and headed to the boat.  After greeting Dave and getting a tour of the boat, we pulled anchor and took off for an island.  On the way, we had  our conch salad with cheese and crackers.  We went to Man-O-War Cay to position ourselves to snorkel at the Fowl Cay Preserve in the morning.  The bay we anchored in is near a narrow stretch of the island.   It is so narrow, that we could hear crashing waves on the other side.  So we hopped in the dinghy to check it out.  We anchored the dinghy at a sandy beach, walked up a small hill to a nice picnic shelter, crossed the “highway”, a rough road for golf carts, and there it was.  Right here, it was rocky, so we decided not to snorkel to the reefs that were on this side.  We just enjoyed the view and headed back to our boat.

On the way back, we stopped at the boat Bogomil.  This was the German couple we had visited with in Green Turtle Cay the first day we were here.  So we stopped to visit again.  We introduced them to Cheryl and Ellen said “my husband loves it when I have a girlfriend visit, because we can talk all we want and doesn’t have to.  He can be doing something else”.  Sounds like Dave.  Is this something with all husbands, or only sailing husbands?  She liked the cover on our dinghy and was trying to sew one for theirs.  So she said “I have been needling my cover, but it doesn’t look as nice as yours.”  Dave told her that Cheryl was a professional and could probably help her.  She said “No,no, she is on Holiday.”  So we have been using that phrase ever since.  “she’s on holiday”.

Back at the boat, we had a nice dinner outside in the cockpit, watched the sunset, and just visited (the girls anyway).  We wanted to stay outside and it was a little windy for cribbage, so that had to wait.

(I lost other pictures from today when my laptop malfunctioned, bummer)

Posted by svluckofafool at 6:09 PM