Cheryl put together this flight plan with about 2 weeks notice, so she had an adventure ahead of her.  Today, she flew to Freeport on Grand Bahama Island.  Then she caught a ferry to Ft Lauderdale this evening.  She’ll spend the night there and fly back to South Dakota tomorrow.  Her flight was about 12:30 and she needed to be at the airport at about 11:00.  We had looked into staying at a marina for the night, since we had other friends flying in today, too.  Then it would be easier to transfer off and on the boat with luggage.  Any maybe we would have a laundromat to clean towels and sheets.  (we would be OK, if not).

Someone in Florida had given us the name of a marina where the dock master was a friend of his.  So we hailed Harbor View Marina to see if they had a slip.  They didn’t at the time, but a boat was leaving and it would be free later today.  Since we needed fuel, they said we could come in for fuel and stay on the fuel dock until the slip opened up.

When you enter the Nassau harbor, you have to request permission to enter from the Nassau Harbor Control.  We had been listening to people do this for about a half hour on our way in, so I called them when we were  close to the east end of the harbor.  They asked me where our last port of call was and where we were headed.  I told them we were going to the Harbor View Marina, but hesitated about our last port of call.  I gave them Hopetown on Elbow Cay in the Abacos, because that was actually the last town we were in.  Since I hesitated, they asked for our documentation number, which Dave told me off the top of his head.  Then they granted us permission to enter.  I think they wondered about us for a minute.  After we thought about it, we wondered if we should have given them Green Turtle Cay, because that is where we checked into customs.  And I guess if our last port would have been in the USA, they would have directed us to the customs office.  Learn something new every day.

When we approached the fuel dock for the marina, there was another boat there.  So we tried to go east and west in the channel waiting.  There was all kinds of boat traffic.  And two other boats wanted to pull up there for fuel.  So we ended up anchoring the boat so we could get Cheryl to shore.  We took the dinghy to their dinghy dock, but we think it was actually a public dinghy dock.  We got rid of our garbage for free, yeah!  Then we walked into the Rubis gas station/convenience store to get Cheryl a taxi to the airport.  We had hoped to go out for breakfast together, but we were running short on time.  When the taxi arrived, we said our good-byes, knowing that we will see each other in July.  So it wasn’t too hard.  Actually it was harder for her, because she hated to leave.  We really had a wonderful week together.  She loved every bit of the experiences and just seeing how we live on the boat.  She said she had a whole new appreciation for how much work goes into living aboard a boat.  She also plans to submit a blog entry for me with her perspective of the week.  So watch for that in the next week or so. 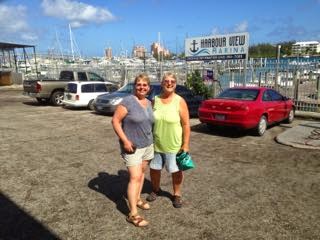 We noticed at the gas station that it was full service and the employees handled all the money transactions with a lady that was in a “cage’ with bars.  We had heard that there was  crime problem here, so it made sense.  We still wanted to go out for breakfast (Cheryl’s treat), so we walked to a shopping “mall” about a block away.  We stopped at a Betelco office (Bahamian telephone company) to ask a few questions.  The door was locked and you had to ring a buzzer and someone inside would unlock the door and buzz you in, similar to some apartment buildings in the US.  We noticed all the stores had this arrangement.

We found a cafe/bookstore and had a nice breakfast.  After we ordered our food, Dave walked over to the check out counter of the book store that controlled the buzzer.  He asked them about it and they said it was because to the high number of homeless that just want to use the facilities.  Then Dave said “well I look pretty scruffy and you let me in.”.  They laughed and so he added “I don’t need the bathroom, I just want to spend the night in here.”

We have friends from MN arriving at 1:00 today.  So we decided to go to the grocery store that was right here to pick up just a few things.  Before we left the dock, we found out that the boat that was supposed to leave decided to stay another night, so they didn’t have a slip for us.  There really weren’t any facilities that made paying for a slip worth while anyway.  So we thought we would just leave the boat where it is, pick up Joe and Erin and take off for an island.

Back at the boat, I put things away and started cleaning for the next round.  Dave emptied fuel from the jerry cans into the tanks and decided to just take the cans up for fuel in the dinghy.  Much less hassle than moving the boat again.  After that, he went back to the dock to pick up Joe and Erin.  I had sent them an e-mail last night telling them to meet us at this marina, not knowing if we would have a slip or not.  It is really strange to not be able to call each other when making plans to meet.  After about an hour after their flight landed, 2:00, Dave started calling me on the radio to see if I had gotten an e-mail back from them with any message about their arrival. Then about every 15-20 minutes I  would check online with no news.  About 3:00, we decided to send them a text.  The Betelco lady said texts were included in our data plan.  But we knew it would still be expensive to a US phone #.  Well that worked.  They had sent us an e-mail, which I hadn’t received, that their flight was cancelled and they wouldn’t be in until 8:00pm.

Dave came back to the boat and we discussed what we wanted to do with the boat now.   There were about 10 boats anchored in this area, so we decided to just stay put for the night.  Otherwise we would move the boat now while it was still light.  It will probably be a rough night with all the traffic in here, but it was rough last night by a deserted island.  The guide books discourage you from anchoring in the harbor.  They said there were 300 years of wreckage on the bottom that you can hook your anchor into.  But we felt like we had a good anchor set.

Dave and I had a late lunch/early dinner on the boat.  I did some researching into the islands in the Exumas.  Dave headed back to pick up Erin and Joe and returned about 9:00pm.  We had a fun evening sharing stories and getting settled.  Always fun to see them again.