On Friday, we needed to get to Nassau for Cheryl to fly out on Saturday.  The week sure went by too fast.  When the other two left, Dave yelled “see you in Nassau.”.  But listening to the radio later that morning, we found out they went in the opposite direction.

As we were bringing  up our anchor about 10:30am, we needed to go in reverse.  Well, the motor stopped abruptly and we put it in neutral.  The lines for the dinghy had gotten in the prop.  So Dave put on his swimsuit and snorkel gear to check it out.  There were 3 lines and all 3 were wound around the shaft and prop.  Bummer!  We had just put away all the hookah gear, which would have allowed him to stay under water.  Dave got out his lethal knife that attaches to a boat hook and went after it, one breath at a time.  It took him until about 12:00 to free everything.  One bridle was in pieces, one was now in two nice pieces, and the most expensive one wasn’t damaged.  It took about another 30 minutes to clean everything up, including Dave, and put things away before we could go back to bringing up the anchor.

Dave had lengthened the bridles because we were going to be making a passage today.  The dinghy follows behind us smoother if it is further out.  He had said “watch the lines”, but it didn’t sink in that it was because they were set longer than usual.  The engine sounded fine, and we didn’t feel any unusual vibration, so we feel confident that there wasn’t any damage.  But I learned something that may help us avoid problems in the future.

It was about 35nm to Nassau and we thought we would anchor outside of Nassau harbor at a nearby island.  Shortly after leaving our anchorage, we were able to set sails and turn off the engine.  It was a beautiful light wind day with very little boat traffic and beautiful blue water.  It was between 2000 and 3000 feet deep through out the bulk of this passage.   About 4:00, the wind was dying and we started worrying about getting to our destination before dark.  So we started the engine along with the sails.  We debated on where we should spend the night.  We ended up on the north side of Rose Island  which is on the north west side of the island of New Providence, where Nassau is located. 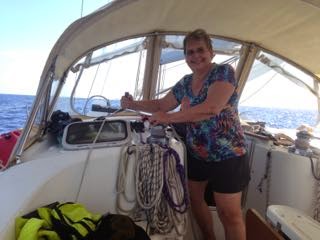 We had a nice dinner of refried bean tostadas, then let Cheryl get organized.  She packed really light, so it didn’t take long.  We exchanged some photos through our computers and called it a night.  The anchorage was very “rolly”, meaning the boat was rocking and rolling all night.

Posted by svluckofafool at 8:56 AM