We made it through the night without any other events caused by the wind.  As a catamaran pulled in and anchored near us today, I asked Dave if he had any opinions on the types of sailors that sail different types of boats.  He said he assumes that all the other boaters know less than him.  Not that he knows it all, it’s just “defensive sailing”.  You have to watch out for yourself.  So even though you feel safer in a harbor in strong winds, there are dangers from other boats being so close to you.  It’s a trade off.

Today was another good organize and clean day.  There are some areas where we tend to just shove things to get them out of the way.  Well, we went through a couple of those areas, got rid of some things, stored others differently, organized, cleaned and replaced as needed.  Wow, I never knew cleaning could feel so good!

I was cutting up an egg carton for the garbage and started laughing because it felt like a craft project.  In Brunswick, GA at the marina, I was invited to join some ladies at the yacht club on Tuesday mornings to work on whatever craft you are into.  I could just see myself carrying in all my plastic garbage and cutting it up and others giving me advice on what they do on their boats :))

We rewarded ourselves with a dinghy ride to shore to get fresh conch salad.  We walked past George yesterday by one of the marinas.  We watched him take the conch out of the shell and skin it to make conch salad, which is what I would call conch ceviche.  We told him we would  be back.  So today we ordered 2 pints of conch salad.  And a couple other people showed up right after us and asked for 2 pints.  So we watched him take the conch from the shell, skin them, chop them up.  Then he chopped fresh onion, green pepper and tomato, mixed them all together and put them in containers.  Then he added some orange juice, fresh squeezed lime juice and a little hot sauce.  So the conch is raw and the lime “cooks” the meat.  With ceviche, we usually let it sit several hours.  But he said you could eat this right away.  Which we did.

We went back to the boat and had our conch salad with some crackers and cheese.  This was about 4:00, but ended up being our dinner.  We saved some to make an omelette tomorrow.  Generally, I don’t like raw onion, but this was really good.

While we were watching George make our conch salad, we visited with the others waiting.  2 were pilots that fly charter flights from Ft Lauderdale to Marsh Harbor.  This was the first time that the timing allowed them to actually see the island besides the airport.  I asked their cab driver where the airport was and how long of a ride, etc, because I had a friend arriving next weekend.  He gave us his card and said to let him know and he would pick her up.  Right before they left, I remembered that I was going to call for a cab in the morning to go to church.  So I asked if he could pick me up at the public dock and he will.  We noticed that there were cabs waiting at the dock yesterday.  But if there wasn’t one there in the morning, I would have had to use the hand held VHF radio and call for one on channel 06.  I feel much better knowing he will be there to meet me. 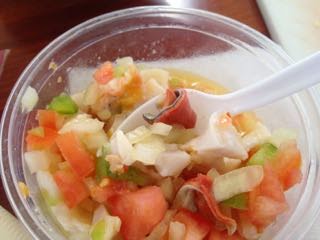 Posted by svluckofafool at 1:48 PM