This morning, the big yacht was still there.  I could see people on the top deck moving around.  At first I thought they were exercising, but without binoculars, I think someone was getting a massage.

We didn’t think the water maker was very efficient, so Dave checked the filters today for the generator and the water maker.  The generator filter was heavily clogged with sea grass.  We really need to stay on top of that, or other systems are stressed and can fail.

Dave showed me how to run the water maker awhile back, but this week, I took notes to make my own cheat sheet.  So today I felt comfortable running it myself.

We decided to stay put another day.  We are looking into buying a week of internet service.  It’s amazing how it has become a part of our lives.  We are OK with not checking Facebook or e-mails for a while.  But we usually read a weather update through our e-mail everyday from Chris Parker.  And anytime you want to research something, you are stumped.  We even rely on the internet for recipes.  I brought a few hard copies and have started putting some recipes into a file in our computer.  But many things we just look up.

If we can pick up wifi from a local source, it is  really slow.  And the wifi at most marinas has been slow, too.  Dave likes to update charts and other apps as needed.  The last time we had internet, he was trying to download an update for several days with no luck.  It’s easier to be without our phones that without wifi.

We have filled one tall kitchen garbage bag in 5 days.  That includes any small garbage bags from the heads that can be put in this one.  So we are storing it in our forward head in the shower stall until we can take it to shore.  I think that is a first since we have usually been someplace to drop it off.  Dave’s been looking for a ditch to throw it in, but hasn’t seen one.  The marina on Man O War charges $1 per bag to take your garbage. And I heard on the cruiser’s net this morning that in Hopetown, on Elbow Cay, the garbage truck comes to the public dock MWF for an hour to pick up garbage.  We are collecting food garbage and throwing it overboard.  And I am cutting up and plastic or styrofoam.  It’s amazing how much less space a gallon milk jug takes once it is cut up.  If we were really remote, we would separate all paper and burn it on shore.  Crazy what you take for granted.

It rained off and on today.  But we were able to have a nice dinner in the cockpit again. 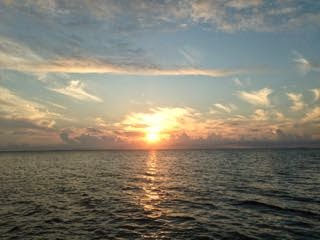 Posted by svluckofafool at 8:01 PM