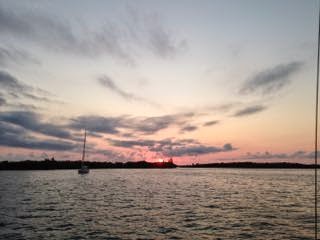 We have noticed that there are fires on the islands almost everyday.  We don’t know if they are burning trash or growth from vegetation.  Sometimes we notice it at night, too.  It reminds you of a campfire, which we like, but Dave worries about it bothering his sinuses.  This morning, I woke up about 6:00 to the smell of smoke and thought about our clothes on the lines outside.  I went out to check them, but they were still damp.  Oh well.

I stayed up and watched the sunrise.  We listened to the weather forecast and decided we wanted to move further south today.  The Sea of Abaco is between Great Abaco Island and a string of smaller islands to the east.  South of here, there is a shallow area we can’t sail through.  So our next leg involves a treacherous area if the winds are too strong.

We had breakfast, gathered and folded the laundry (they didn't smell like smoke), and set sail.  I forgot how towels feel when they have been dried on the line.  Whale Cay channel goes between an island and some rocks.  Then we have to sail on the outside of Whale Cay for a couple miles and back in though another channel that has some broken pilings that aren’t is use, so you have to pay attention to where they may be under water.  Pilings are posts that mark channels or are found at docks to support docks and separate slips.

It was one of the calmest days I have ever seen on the water.  As we approached Whale Cay Channel, about 6 other boats had just come though the channel, some south and some north.  So we watched the charts and made it through and around and back in just fine.  If there are heavy winds, they hit you from the side and rock your boat.  Plus the wind pushes you towards the rocks.  They call this a “Rage” described as “powerful, turbulent and lethal seas”.  So I guess we picked the perfect time to pass through there. 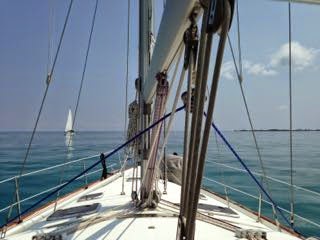 We were heading south along Great Guana Cay towards the area we wanted to anchor and saw a shark in the water next to our boat.  It was about 8 feet long and the typical shark shape.  Can’t tell you the actual kind unless I spent some time on the internet.

We anchored in Fisher’s Bay about 3:00.  We had to watch for a sandy spot, not grass.  And there were a few submerged rocks in the area, too.  But we were happy with our location.  We spent a couple hours wrapping up things and checking into a wifi connection, then taking care of some business.  About 5:00 we went exploring into the neighboring harbor and then to the shore in Fisher’s Bay.  We had to get into the water and pull the dinghy up on the shore.  We walked to Grabber’s and sat at a table outside were we could watch the sunset.  They had a small menu and it was rather pricey for what they were offering.  So I had an appetizer and Dave had chicken in a bag.  The chicken and french fries are cooked together  and a sauce it put on all of it.  Interesting.  I decided to try the Grabber’s special rum drink that was $9. But  I stopped with one because of the price and because I needed to get back to the boat without falling into the water.

We enjoyed a beautiful sunset from the beach and on our way back to the boat.

Posted by svluckofafool at 8:13 PM