Whew! A hot busy day.
We decided to spend one more night in the marina.  So this morning I made banana bread as soon as I got up.  I guess we over bought bananas when Alice was here.  I got out all the pan, bowls, utensils, and ingredients last night so I wouldn’t have to rummage around if Dave was still sleeping.  And he was.  Last night he went to bed smelling popcorn.  And this morning he woke up to the smell of fresh banana bread.  You share the smell of everything on a boat.  Just remember that.

I set up a ride with the marina’s shuttle to go to the grocery store for our last fresh provisions, AGAIN.  As I was waiting in the cock pit for him to arrive, sweat was dripping off my forehead and neck.  It was in the low 80’s and pretty humid.  When the guy picked me up, he said we should have a couple more months of this nice weather before it gets hot and humid.  We really haven’t experienced the south in the summer.

When I returned, Dave had printed everything we think we’ll need for our taxes.  We are sending them off to the accountant in Ft Myers Beach that helped us last year.  We thought we would have to file an extension since we wont’ be back until July.  But she thought things could be done electronically.  If not, she’ll extend.  I am going to make a run to a UPS store and West Marine that are close to each other.

We spent a good part of the afternoon cleaning the jib sail.  Since we were still in the marina, Dave decided to clean it with bleach.  So I would raise it a section, let Dave clean it, then raise it again.  He could see the green at the outer edge, where it was more exposed to rain.  But as he sprayed the sail, he said it was like the paint books where you just added water to the page and the colors would appear.  Once it was wet, you could see more green.  That's also true if you are looking for agates.  They are prettier when wet.  He then let the sun and bleach kill the mildew.

When we had the sail fully raised, something was binding at the top and was pulling the furler apart (the mechanism that rolls up the sail instead of having to remove the sail each time).  We had to lower and raise it a few times to get it adjusted right.  We didn’t want that to be an issue while we were sailing. 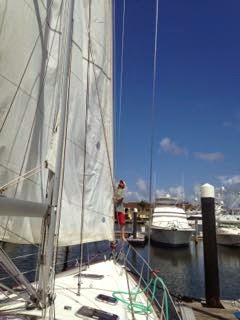 When Dave was done, he sat down on the deck and hosed himself off.  He said he felt like he had been in a chlorinated pool.  The bleach he was spraying kept misting over him in the breeze.  Then he “swabbed the deck”.  A guy walked by drinking from a water bottle.  Dave put the hose to his mouth and told him he was enjoying the “Florida mountain fresh spring water”.  They had to chuckle together over that one. 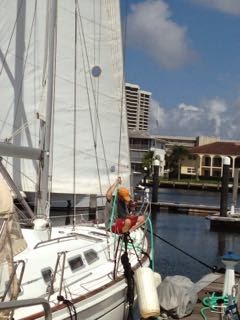 By now it was a little late for the shuttle to take me to UPS and West Marine and pick me up before 5:00 again, when the shuttle quits.  So we scheduled that for the morning.

I decided to clean the heads again before we leave.  I used to do that on a regular basis, but haven’t really been on any schedule lately.   The only problem was that Dave had to have the hatches closed while he was washing the deck.  So it was a little warm.  Have you ever cleaned one spot, then had to keep going because that clean spot stood out amongst the surroundings?  I have been neglecting the shelf and walls next to Dave’s side of the bed.  So once I started, I found the mildew taking over.  So I had to clean all the way to the V of the V-berth before I was done.  Which led to my side, too.  I start with vinegar.  If that doesn’t get it, I use Krud Kutter, then go to a scrubber sponge that is like an eraser for fiberglass.  I crumbles and leaves a mess, so it’s the last resort, but it works.  Isn’t living on a boat glamorous?

We were both hot and sticky and tired by 5:30.  So we easily talked each other into having pizza delivered.  We found a local place that delivered, not a chain, and it was great.  Then we took showers and called it a night.  We usually end the evening by catching up on computers.  Our weather guru e-mails a forecast everyday.  Looks like Saturday-Sunday is our "weather window".  Yippee!!
Posted by svluckofafool at 8:02 PM