Monday:  At the cross country site, we were paired with our skier for the week, checked out gear for our participant, then started skiing.  This was the third year that I had skied with Kaye Leslie from Toronto.  Neither one of us has been on skis since Ski for Light last year.  So we did a 1km loop before lunch and a 5 km loop after lunch.  We both wondered why they made that 5km loop longer this year :)
For many years now, SFL has been providing dinner for us at the Saloon #10 bar on Monday nights.  Actually the food is donated by a generous board member, but prepared by SFL volunteers.  This year we had an awesome meal with BBQ ribs and brisket.  After dinner, the Canadians invited several of us to one of their rooms for wine and beer.  My brother, Don Zeller, from Pierre was volunteering as a down hill guide.  So Don, Bev and I decided to join them for awhile.  When we arrived, someone announced “let’s be nice to our sighted friends and turn on the lights.”  It was a fun evening of sharing stories and drinks. 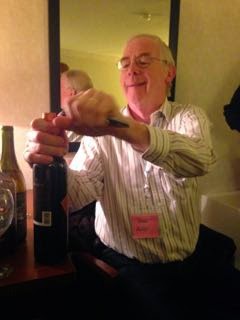 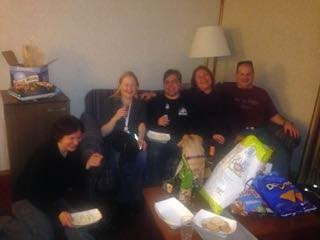 Tuesday:  Kaye spent the morning snowmobiling.  So I didn’t go to the cross country site until lunch time.  My sister and her husband, Janice and Jim Moore, who recently retired, came out the the Hills to check out SFL.  They picked me up at the Holiday Inn in Deadwood and we went to Terry Peak.  They were able to see all the different adaptive skis that we have for physically impaired skiers.  And they could see different ways that visually impaired skiers skied according to their ability: on their own with verbal cues from a guide via helmets with radios, or side by side with a pole held between them, or tethered.  We watched Don guide and had a few photo ops.  Then all of our family members went over to the Cross country site to have lunch.  Don, Beverly, Janice, Jim and I had a fun lunch introducing them to everyone.  After lunch, Bev and Don went back to Terry Peak, Janice and Jim back to their vacation home in Sturgis, and I went skiing with Kaye.

Tuesday night, Janice and Jim came back to Deadwood to join us for dinner.  The family went to Maverick’s.  It is a new restaurant in the Gold Dust casino.  Tami Petersen, Heather and Terry Spencer joined us.  Then we went  to the Bodega for Karaoke (minus Janice, Jim and Don).  The SFLighters really enjoy themselves at karaoke, and many people were dancing along with the singing.  Kaye wanted to sing “O Canada” but they didn’t have it listed as a choice.  So we settled on “O Bla Di, O Bla Da, life goes on.”.  We asked Charlie Gould to join us, since neither one of us were sure we would remember all of the verses, even with the words.  He wasn’t shy and we ended up with a few others joining us.  The rest of the crowd formed a conga line.  I guess it was a hit. 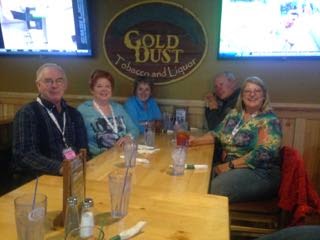 Wednesday:  The last 2 days had been beautiful in the 60’s.  Today, a cold front moved in.  The trails were icy, so Kaye and I decided to change our race to the 1 km instead of 5 km.  We made a couple runs today to get our estimated time.  Kaye also went snow shoeing with Charlie Gould.

On Wednesday afternoon, there is a bonfire at the cross country ski site and the down hill crowd joins us.  This year, one of the Canadians, David Hoffman, was guided by Phillip Breland of Deadwood.  Phillip and his wife, Georgette, have been SFL guides since it began 36 years ago, if they were needed.  They also own a store in Deadwood called the Shankar.  Check them out online at Shankar Arts or deadwoodjewelry.com.  Anyway, there were 2 vegetarian Canadians this year.  So the Canadians were invited to Phillip and Georgette’s for a vegetarian dinner.  4 of the 6 wanted to attend.  And I was invited to join them, plus I borrowed Heather’s Yukon to transport them to their cabin outside of Deadwood.  I have known Phillip and Georgette for about 25 years, but have never had the opportunity to see their home, so I was glad I wad able to join them.  Their cabin was built in 1892 and was beautifully restored.  They had a friend visiting from Colorado named Ilene.  Georgette and Ilene spent the day trying out new recipes for us.  We had a total of 9 dishes along with plenty of wine (only one glass for the driver).  It was a WONDERFUL meal.  Another fun evening.


Posted by svluckofafool at 7:53 AM