We finally left NC after 4 months!!  It felt similar to leaving Alabama last December, but we weren’t as nervous.

We woke to dense fog, but nothing was going to stop us.  The draw bridge just south of the marina opens on demand before 6:00 am and after 6:00 pm, and at 10:00 am and 2:00 pm.  We decided to take the 10:00 opening since we have never been early morning people.  We were out of the slip at 9:30 as planned with the help of Mike, the dock master.  Then we called the bridge tender to request the opening and motored up and down the river waiting for the opening.
Normally it takes about 4 hours to get to the mouth of the Cape Fear River and out on the ocean.  Today it took us 6 hours with fog the entire way.  We shared the watch so we would have 2 sets of eyes.  About 1:00, the fog was lifting, so I let Dave go below for a nap.  But by 2:00 it was back and I panicked when a large boat gave out a warning 5 second horn blast really close and I couldn’t see him.  No more nap for Dave.  We signaled back and forth several times until we saw the boat cross behind us and head for shore.

It was still foggy once we got to the ocean.  There were 3 different boats on the radar and AIS (automated  identification system) that we couldn’t see at first.  Once we figured out which direction they were going and could actually see them, we set a course for Charleston with the autopilot.  At 5:00, I started the first of our 3 hour watches.  We then rotated shifts every 3 hours. 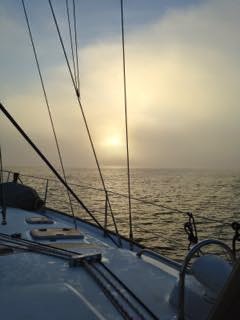 Fog lifting on the ocean.  We actually headed WSW because of the curvature of the coastline

The fog cleared and an almost full moon lit our way through the night.  We made our dining table into a bed to sleep on when we were off watch.  It is more centrally located, so more stable than our v-berth.  During my 5:00-8:00 am watch, the sun came up.  It was beautiful and humbling to see and so peaceful when you don’t see land, another vessel or human being.  Just you and the ocean and the sunrise.  Doesn’t get any better.
The ocean was fairly calm all night.  There were winds less than 10mph and just rolling 2-4 foot swells.  In the morning, the winds had picked up just over 10mph.  The wind was on our stern most of the passage.  About 12:00 noon, we turned about 90 degrees to the starboard to enter the Charleston shipping channel into their harbor.  Now the waves were hitting us broad side, so it was more rough.  I could hear a few things hitting the floor below, but Dave tried to sleep a little longer.  He got up about 1:00 when we were close to entering the harbor.  I would have woke him up if he hadn’t.  There is a lot of traffic in this harbor.  We chose to go left up the Ashley River and anchor across the ICW from Battery Park in historic Charleston.  The Cooper River has much more commercial traffic, therefore much more turbulence during the night.

We were anchored by 2:30pm.  We went 150 nautical miles (172.5 miles) in 28.5 hours.  As Dave settled the boat for the night, I cooked us a hot meal, since we had been eating cold prepared foods for the last 24 hours.  We spent the afternoon figuring out our plan for the next leg of our trip and checking weather reports from several sources.  Sounds like a windy weekend coming up.  We caught up on internet since we had service again.  We had soup about 7:00 and went to bed by 8:00 so we can do this all over again tomorrow.  Dave moved the bedding from our salon area back to our bed.  I heard him say “making the bed is just like throwing a casting net for shrimp”.  He’s been practicing casting the net for when we get to Georgia.

This was the best passage for me so far.  I felt rested, stayed warm, no sea sickness, and fairly calm seas.  I wasn’t sure how it would go since we had been land locked for 4 months.  Dave was great, as always.  He doesn’t sleep as well, but he never complains.  This next passage will be windier and maybe some rain.  But we’re moving south!!

Posted by svluckofafool at 9:07 AM